The President’s Military Buildup Plan Would Cost An Extra $683B, Budget Watchdog Says

The military buildup proposed in the Trump administration’s 2018 budget would cost a total of $683 billion over the next... 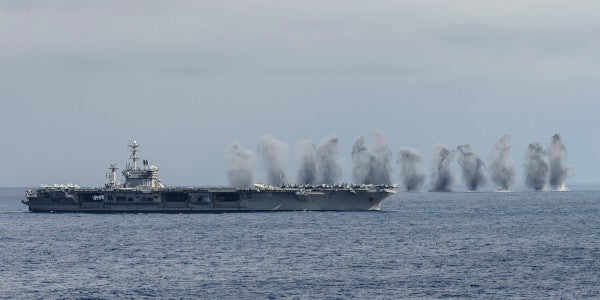 The military buildup proposed in the Trump administration’s 2018 budget would cost a total of $683 billion over the next 10 years, culminating in a Pentagon base budget a decade from now that would dwarf peak Cold War-era spending, a report said.

Between 2018 and 2027, efforts to increase the readiness and size of the force would drive the budget 12 percent higher than the costs laid out for those same years under the Obama administration’s final budget plan for the same period, said the Congressional Budget Office report, which was released on Monday.

President Donald Trump’s goals for the military “would result in steady increases in costs so that by 2027, the base budget (in 2018 dollars) would reach $688 billion, more than 20 percent larger than peak spending during the 1980s,” the CBO said.

The Pentagon’s 2018 budget calls for spending $640 billion — $575 billion of that amount set aside for the Defense Department’s base budget, which funds day-to-day operations and procuring weapons systems. The base budget request is 3 percent higher than the projected amount for the same year as calculated against the previous administration’s goals.

Besides added personnel expenditures, other factors include plans for the Navy to increase its fleet to 355 battle force ships, nearly 30 percent more than the current number.

The CBO’s projections include an additional increase in F-35 procurement — a rise in production rate from 60 aircraft to 80 aircraft per year, for a total of 132 additional aircraft by 2027.

One obstacle that remains is the 2011 Budget Control Act, which caps the amount of money available for the Pentagon’s base budget. The 2018 budget exceeds the spending cap by $54 billion.

To avoid the automatic budget cut, Congress would have to eliminate or lift the spending caps or scale back military plans.