A private company in Texas has acquired scores of old French fighter jets to expand its adversary operation, which simulates the "red air" enemy force in U.S. and allied war games — with its 63 former French air force Dassault Mirage F1s, Fort Worth-based Airborne Tactical Advantage Company possesses an air force that rivals that of many countries 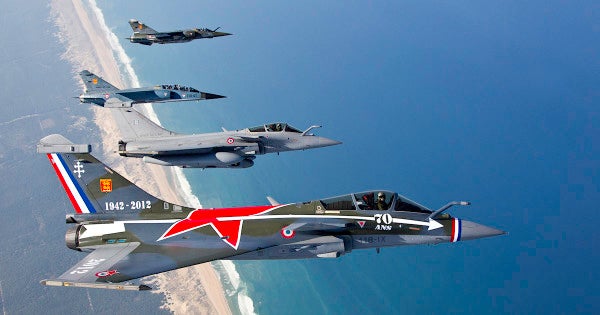 A private company in Texas has acquired scores of old French fighter jets — and with its 63 former French air force Dassault Mirage F1s, Fort Worth-based Airborne Tactical Advantage Company possesses an air force that, in size, rivals that of many countries.

ATAC in 2017 announced it would buy the single-engine Mirages in order to expand its adversary operation, which simulates the “red air” enemy force in U.S. and allied war games.

Two years later ATAC announced that, with the help of parent company Textron, it has finished refurbishing and upgrading the supersonic Mirages.

“Textron retrofitted around 45 of the F1s with modern avionics systems such as digital radio-frequency memory-jamming capabilities and upgraded radars,” according to Jane's. “ATAC plans to use the Mirages for the U.S. Air Force adversary-air requirement, which requires almost 150 aircraft to fulfill the service's red-air training needs.”

Until recently, the U.S. military mostly provided its own red air. The Air Force operated three “aggressor” squadrons flying F-15s and F-16s. But the flying branch in 2014 shuttered the F-15 unit as a cost-saving measure. Two squadrons — one each in Nevada and Alaska — continue to fly a few dozen F-16s in the adversary role.

While the sea services have not cut back on their organic red-air capability in the same way the Air Force has done, Navy and Marine squadrons still need more adversaries than the services' own squadrons can provide.

“Adversary capacity is the greatest issue in Marine Corps air‐to‐air training,” the Corps stated in its 2018 aviation plan.

The problem for the Marines was that they're replacing around a hundred Harrier ground-attack jets with new F-35s that possess much greater air-to-air capability. In order to use their F-35s to their greatest potential, more Marine pilots must train to fight other planes.

“Annual fleet adversary requirements are expected to increase for transitioning squadrons from 6,400 air‐to‐air sorties in '17 to 8,300 sorties per year in order to meet … requirements in '22,” the Marines stated.

The service stated that it ultimately would like annually to perform 10,000 adversary sorties. But adversary training is “restrained by aircraft utilization and numbers of F‐5s assigned.”

To bolster its own adversary squadrons, the Navy in 2018 awarded Tactical Air Support a five-year, $106.8 million contract to fly red air sorties.

The Air force requires even more adversaries than the sea services do. As a stopgap, the Air Force has awarded to Draken two small contracts for red-air services at Nellis Air Force Base in Nevada as well as at six Air National Guard bases.

In late 2018 the flying branch asked red-air companies to submit proposals for a massive potential deal that would see a single company providing 30,000 annual adversary sorties at a cost of potentially billions of dollars. The Air Force expects to award a contract in 2019 or 2020.

“Ideally it wants an aircraft capable of flying one and half times the speed of sound, or Mach 1.5, with a service ceiling of 35,000 feet, and a 45-60 minute fight endurance,” Air Force magazine reported, citing an Air Force document.

ATAC with its huge private air force is a strong contender for the lucrative contract. But it's got plenty of competition as the red-air industry quickly expands to meet rising military demand for realistic aerial war games.”

WATCH NEXT: The Doolittle Raid