‘This is my struggle, too’ — Protesters call for justice in case of Pfc. Vanessa Guillen

"She was just a Mexican girl trying to help people. It really hurts to think about how she was murdered for that." 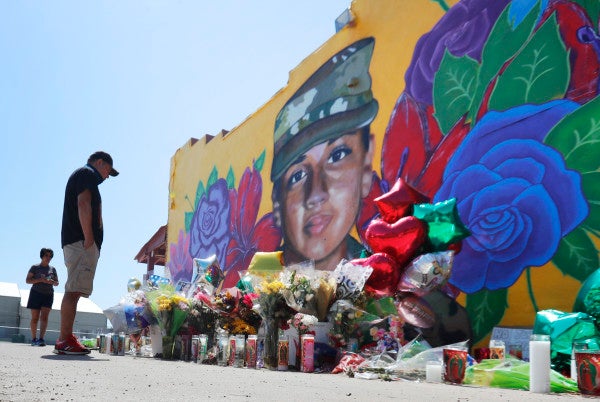 Between espressos and craft honey, Saturday morning at the Santa Fe Farmers Market was, if just for a few minutes, interrupted by cries for justice for Vanessa Guillén. The 20-year-old Mexican American soldier's remains were found in late June more than two months after she went missing from Fort Hood in central Texas.

Karla Gallegos, a 28-year-old Mexican American who graduated from Capital High School in Santa Fe, said the march started at the Railyard on purpose.

“There are a lot of locals there at the market who are kind of like, 'Well, it sucks,' but they're not going to do anything about any of these injustices,” Gallegos said. “So showing up there and marching was a point like, 'We're here, and you need to pick sides. You need to be part of this community. There's a wrong side and a right side.' “

Before her disappearance April 22, Guillén was sexually harassed but didn't feel she could come forward to superiors, her family has told news outlets. Aaron Robinson, the soldier Army investigators say fatally bludgeoned Guillén before dismembering, burning and burying her, shot and killed himself July 1 in a confrontation with police.

The Department of Defense's annual Report on Sexual Assault in the Military estimated there were 20,500 instances of “unwanted sexual contact” in the military during the 2018 fiscal year. According to the New York Times, one out of every 16 military women reported being groped, raped or otherwise sexually assaulted within that year.

The roughly 50-person protest progressed from the farmers market to the Plaza, where a dozen demonstrators took to a megaphone to speak out against sexual assault and in favor of intersectionality — the idea that many aspects of a person's identity combined contribute to privilege, discrimination and marginalization.

“I'm an Indigenous woman, and this is my struggle, too,” said 28-year-old Andreana Ahidinideen Thompson, a Santa Fe native whose family is from the Chi Chil Tah chapter of the Navajo Nation. “Some people can check out and take a mental health day. I can't do that when my people are dying. Immigrants can't do that when they're locked in cages. African Americans can't do that when police are killing them. We have a lot of white privilege in Santa Fe that's not being called out.”

After the march, which was led by Gallegos' brother and uncle carrying Mexican and American flags tied together, Gallegos said Guillén and George Floyd were killed by powerful people who know the rules but thought they were above them.

“She was just a Mexican girl trying to help people. It really hurts to think about how she was murdered for that,” Gallegos said in English.

“As Mexican Americans, we're born here, and we fight for a country that attacks us. But we still fight for it,” she finished in Spanish.