Editor’s Note: This article by Oriana Pawlyk originally appeared on Military.com, a leading source of news for the military and... 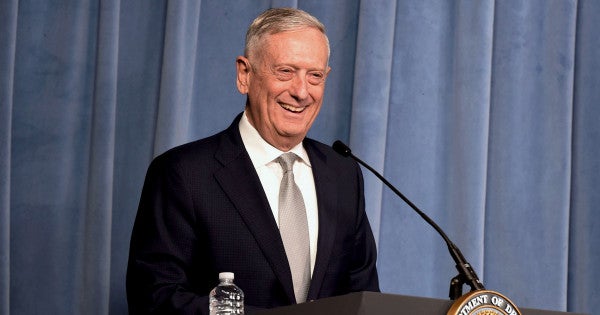 REAGAN NATIONAL DEFENSE FORUM, SIMI VALLEY, Calif. — Defense Secretary Jim Mattis Saturday said Russia attempted to hack the U.S. midterm elections in November, and does not appear to be backing down its aggression in the Kerch Strait against Ukraine.

“Mr. Putin is clearly a slow learner,” Mattis said during the forum here Saturday. “He is not recognizing that what he is doing is actually creating the animosity against his people, he's not acting in the best interest of the Russian people,” the secretary said during Q&A; following his keynote speech.

Notably calling President Vladimir Putin out by name, Mattis said that Putin's actions have become a catalyst for NATO countries to “rearm and to strengthen” on a unified and democratic level.

“There is no doubt the relationship has worsened,” between the U.S. and Russia. “He tried again to muck around in our elections this last month, and we are seeing a continued effort along those lines,” Mattis said.

“We are dealing with someone that we simply cannot trust, he said, noting that Russia's “actions speak louder than words.”

That comment reiterated those he made several days prior that Russia's attack upon and seizure of three Ukrainian ships violated international law.

Russia Nov. 25 seized two gunboats and a tugboat form Ukraine as well as dozens of personnel onboard in the Kerch Strait between the Black Sea and the Sea of Azov.

“What we witnessed this weekend is yet another reckless Russian escalation” of what began with Russia's seizure of Crimea from Ukraine in 2014 and its ongoing support for separatists in eastern Ukraine, said outgoing U.S. Ambassador Nikki Haley in response to the actions.

Haley was one of the first members of the Trump administration to condemn the attacks.

President Donald Trump said Nov. 27 that he was weighing a decision to cancel a scheduled meeting with President Vladimir Putin at the G-20 Summit in Argentina, given the escalation of hostilities. The White House on Saturday said Trump, however, did have an “informal” conversation with the Russian president.

Press secretary Sarah Sanders did not elaborate on what was discussed during the conversation, according to USA Today.

During the forum, former Defense Secretary Leon Panetta said Russia will continue to undermine its neighbors, but also the United States in order to project its strength.

Now more than ever, it’s time to send “a clear message” to Putin, Panetta said Saturday.

“We have got to be much stronger in drawing lines with Putin,” he said, adding he believes Putin isn’t a slow learner, but rather “a bully.”

“Frankly, I regret the president didn't meet with Putin” at the G-20 Summit. “I think the opportunity is to sit down and directly confront an adversary,” Panetta said.

While Trump spoke briefly with Putin on the sidelines of the summit, he chose to cancel the two leaders' formal meeting.