A person has been arrested after an “apparent attempt to ram” an entry point to a U.S. Air Force base... 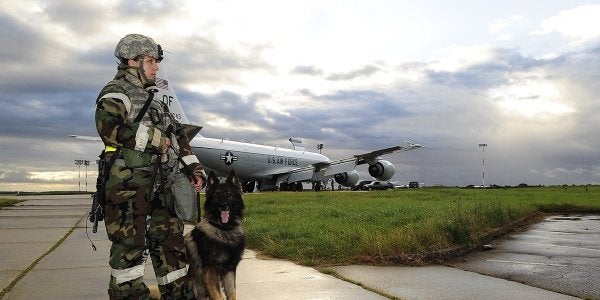 A person has been arrested after an “apparent attempt to ram” an entry point to a U.S. Air Force base in England.

RAF Mildenhall in Suffolk was placed on lockdown after the incident, according to the Reuters news agency.

The base has a Royal Air Force name but is used by the U.S. military. It houses about 3,100 U.S. military service members and 3,000 more family members, according to Reuters.

Aerial footage of police activity at @RAFMildenhall following the security alert this afternoon.https://t.co/9jkjDmOKAdpic.twitter.com/fVxRSwIcGZ

U.S. military personnel opened fire when the man tried to enter the base. He was ultimately caught by police with only “minor cuts and bruises.”

The incident is now over, and police say there is “no wider threat to the public or occupants on the base.”

“Suffolk Police were contacted at approximately 1.40pm today (Monday 18 December) to reports of a disturbance at RAF Mildenhall in Suffolk. […]

Shots were fired by American service personnel and a man has been detained with cuts and bruises and taken into custody.

“No other people have been injured as a result of the incident.”

During the lockdown, personnel on the base were instructed to hide in the offices, lock their doors, switch the lights off, and close their windows and curtains, Brian Boisvert, a U.S. sergeant currently on the base, told Sky News.

The lockdown was lifted after about an hour, at 2.35 p.m., Boisvert added.

A report from BBC news previously described the man's attempt to get into the base as an “apparent attempt to ram” the checkpoint.

The 1,162-acre compound was due to be closed after the US said it would move its operations from the base to Germany, Reuters reported.