The Air Force Is Stretched Dangerously Thin, According To 2 Grim New Studies

Like a trucking company with too few trucks and too many deliveries, America's airpower is being overworked and under-maintained. Two... 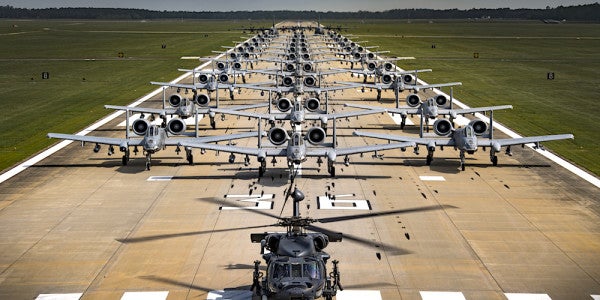 Like a trucking company with too few trucks and too many deliveries, America's airpower is being overworked and under-maintained.

Two recent studies by RAND Corp. and the Government Accountability Office paint a grim picture of U.S. airpower. The RAND study examined whether the U.S Air Force has the capacity to fight in four types of future conflicts: a new Cold War with Russia or China, accompanied by a major regional conflict similar to the Korean and Vietnam Wars; a new Cold War, alongside a short regional conflict such as Operation Desert Storm, peace enforcement operations such as no-fly zones, and a counterinsurgency campaign. Drawing on historical data from actual Air Force operations in such conflicts, RAND estimated whether the Air Force could meet the demand for eight categories of missions, including air superiority, strike, airlift, aerial refueling and C3ISR (command and reconnaissance).

In almost no cases could the Air Force meet 100 percent of demand, according to RAND's calculations. In a long regional conflict, the Air Force could only meet 62% of attack and 65% of strike requirements, but it could supply 92% of aerial tanker demand.

Ironically, the scenario with the least likelihood of combat is the most draining for the Air Force. As RAND noted, “perhaps the most surprising result is that a future characterized by peace enforcement operations is most stressful to capacity.”

The estimates are dismaying: in a peacekeeping/no-fly zone scenario, the Air Force could only meet 29 percent of C3ISR requirements, 32 percent of tanker demand, 40 percent of special operations missions, and 46 percent of bomber missions.

RAND derived those dismal numbers from “prolonged no-fly zones in the Balkans and Middle East, which required continuous rotations of fighter, tanker, and C3ISR/BM platforms.” In other words, prolonged operations — even of routine missions like enforcing a no-fly zone — overtax the Air Force.

Meanwhile, a GAO report reveals that from 2011 to 2016, the Air Force and Navy failed to meet goals for aircraft availability. Examining availability of 13 Air Force and Navy aircraft models, including the B-52, F-22, F/A-18 E/F Super Hornet and AV-8B Harrier, GAO found severe issues such as delayed depot maintenance, needed parts that were no longer manufactured, lack of mechanics, and aircraft flying beyond their service life.

“When aircraft availability goals are not met, training and operational missions may not be fulfilled as timely as needed,” GAO notes. “For example, F-22 squadron officials explained that the lack of available aircraft creates a shortage of trained pilots. F-22 pilots need extensive training to fulfill their air-superiority role. Further, command officials explained that when aircraft availability goals are not met, there may not be enough aircraft to respond to contingency requirements.”

For its part, the Navy has been shuffling aircraft to keep deployed squadrons up to strength, leaving non-deployed units with insufficient planes for training.

There are the usual no-brainer solutions for American airpower: more planes, better maintenance, fewer deployments. But the real problem is that the U.S. military has to prepare for a variety of missions, including peacekeeping or counterinsurgency operations that may be not combat-heavy, but are maintenance-intensive. And it has to do it with a fleet of expensive, aging and frequently finicky aircraft.

Something has to give.