A deal between U.S.-backed Kurdish and Arab forces in Syria and ISIS sent thousands of fighters and families belonging to... 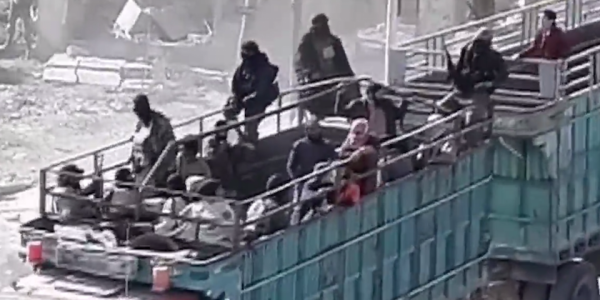 A deal between U.S.-backed Kurdish and Arab forces in Syria and ISIS sent thousands of fighters and families belonging to the terror group on a convoy out of harm's war in Raqqa and deeper into the so-called caliphate where the fighters can regroup or smuggle themselves into other countries.

A group of truckers in Syria reportedly got called out to Raqqa, ISIS's former Syrian capital, for what they thought would be a small job moving a few hundred people around. But it ended up as ISIS's mass exodus from its former stronghold, according to a BBC investigation.

The truckers met around 4,000 ISIS fighters and their families armed to the teeth and strapped with explosives. The terrorist group boarded the convoy of trucks, along with their own vehicles, and reportedly beat and threatened the drivers for the duration of the trip. The ISIS fighters brought so many weapons and so much ammunition, the weight broke a trucker's axel, according to the BBC.

The U.S. not only knew about the deal — they reportedly kept a close watch on the convoy as it drove through the desert towards Iraq's border.

“When the last of the convoy were about to cross, a U.S. jet flew very low and deployed flares to light up the area. IS fighters s— their pants,” one of the drivers told the BBC.

Col. Ryan Dillon, a spokesman for the U.S.-led coalition fighting ISIS, explained to the BBC why the U.S. knowingly accepted the deal.

“We didn't want anyone to leave,” Dillon said. “But this goes to the heart of our strategy, 'by, with and through' local leaders on the ground. It comes down to Syrians – they are the ones fighting and dying, they get to make the decisions regarding operations.”

The U.S.-led coalition has met criticism over its airstrikes killing civilians, but ISIS tactics include hiding among civilian populations and using them as human shields. The massive human cost of continuing the bombing campaign on Raqqa may have swayed the decision makers to allow so many ISIS fighters to leave with their weapons.

The Syrian Democratic Forces, a Kurdish and Arab alliance that has fought ISIS for years, allowed ISIS to leave Raqqa to salvage what was left of the city.

But in doing so, they may have allowed thousands of terrorists to smuggle themselves across borders and launch terror attacks in support of ISIS.

Some of the fighters stayed in Syria, while others have been caught trying to cross the border into Turkey, according to the BBC. Members of an almost exclusively French group within ISIS numbered among the terrorists who got away, and now they pose a threat to Europe.

“There are some French brothers from our group who left for France to carry out attacks in what would be called a 'day of reckoning,'” a young ISIS fighter from France told the BBC.

The retreating ISIS fighters reportedly threatened the drivers and the others they met, saying that they would return and bring with them Sharia law. But ISIS today is a far cry from its heyday, and members of the group that was once bent on martyrdom have now begun to surrender en masse.