A Marine recruit who was at boot camp for almost 500 days headed home this week after his parents sought help from lawmakers on his behalf and then raised retaliation concerns. 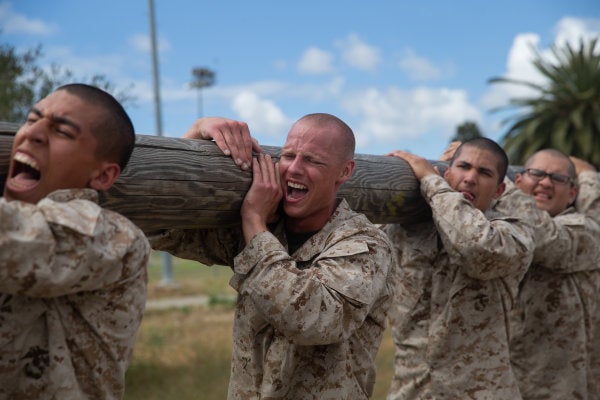 A Marine recruit who was at boot camp for almost 500 days headed home this week after his parents sought help from lawmakers on his behalf and then raised retaliation concerns.

Alex Tipton, an 18-year-old from Arkansas, graduated early from high school in December 2017 so he could ship off to Marine Corps Recruit Depot San Diego. He set out to be an aviation supply specialist.

Just 17 at the time, Tipton had to get permission from his parents to enlist. But when they asked for updates about his condition nearly 16 months after he left for boot camp, his mom said they were repeatedly shut out.

“His birthday is coming up — he'll turn 19,” Jodie Tipton told Military.com before they knew when he'd be coming home. “We are really hopeful we can see him as an 18-year-old.”

Tipton had been at boot camp since February 2018. That's long enough for him to earn the pay of a lance corporal. He was in a rehabilitation platoon for months, even after being told he would never return to recruit training.

He was allowed to keep his high-and-tight haircut, but Jodie Tipton said he still had to refer to himself in the third person since he didn't complete the Crucible, the culminating training event at Marine Corps boot camp.

To be sure, Tipton's experience was not the typical 13-week process most Marine recruits endure. He suffered three separate injuries over the span of about nine months, which repeatedly paused his training.

The injuries included stress fractures to both femurs, which first stopped his training at Day 15. He picked back up at Day 16 about six months later, only to suffer a fractured hand during training with pugil sticks, the heavily padded poles recruits use to prep for combat.

Twelve weeks later, he picked up again and was just days from graduation in December 2018 when his leg pain returned. In addition to again suffering fractures in each femur, his tibia, fibula, ankle and foot also showed signs of stress.

Tipton was told he wouldn't be returning to recruit training. Since then, he'd been stuck in limbo as the Marine Corps and Department of Veterans Affairs processed his separation. Tipton was initially moved to a unit known as a separation platoon, where he was allowed privileges recruits don't get, including calls home.

Then he was suddenly moved back into the rehabilitation platoon, despite being told he'd never return to training.

Jodie Tipton said she and her husband couldn't get straight answers over the next several months about the status of their son's injuries or when he'd be allowed to go home. She sought help from West Coast recruiters, her congressman, senator and the Marine Corps inspector general's office, among others.

That's when her son's phone calls stopped, she said.

“They silenced him,” Jodie Tipton said. “All contact was gone.”

Officials at MCRD San Diego declined Military.com's request to interview Tipton and the drill instructors that oversee his rehabilitation platoon.

Instead of answering detailed questions about his situation, they provided a lengthy statement.

“The Marine Corps Recruit Depot is committed to the health and safety of each young person that accepts the challenge of recruit training,” Capt. Martin Harris, a spokesman for the depot, said. “Recruit Alex Tipton has given his very best effort to earn the title Marine over the last 15 months, and is currently awaiting final approval from the U.S. Navy Physical Evaluation Board to process his separation paperwork. … It is inappropriate for the Marine Corps to disclose medical information or details of this ongoing process.”

Less than a week after Military.com's questions went to the recruit depot, Jodie Tipton said her son called to say he'd be coming home. The family had already sent several letters to the depot's commanding general, the commandant of the Marine Corps, the acting defense secretary and President Donald Trump seeking help with his case.

She had also been in touch with the office of Sen. Tom Cotton, an Arkansas Republican who served as an Army officer, and their congressman, Republican Rep. French Hill.

None of that played into the timing of Tipton's separation, the depot's top enlisted leader told Jodie Tipton.

“[Sgt. Maj. Devon Lee] came on the phone to let me know that this was 'strictly coincidental,'” she said.

Alex Tipton's situation is similar to that of two recruits who found themselves stuck in limbo at Marine Corps Recruit Depot Parris Island, South Carolina, the service's East Coast entry-level training base, in 2012. WhenMarine Corps Times reported on the pair, who had been at boot camp about as long as Tipton, both got approval to go home within a week.

Marine officials at the time also said the decision had nothing to do with the paper's reporting.

The first is called IDES, or the Integrated Disability Evaluation System. During that process, recruits are assessed by the VA to determine whether they have earned a lifelong disability rating for injuries or illnesses from boot camp.

That process has been slammed by the Government Accountability Office as being notoriously slow. Tipton was told to expect the process to take between six and nine months, his mother said.

The other option, LDES, or the Legacy Disability Evaluation System, takes about two months, but it doesn't provide separated recruits with a VA rating.

During either evaluation process, recruits stay at the depots. That's because there are “multiple administrative and medical concerns that need to be addressed,” said Navy Lt. Christina Sears, a spokeswoman at the Pentagon.

“Each individual is handled on a case-by-case basis,” she said. “The care of our patients is a top priority. We want to ensure they have appropriate care for their respective injuries and ample time to recover prior to a determination.”

Tipton was first enrolled in the IDES program, which is used by active-duty personnel being separated from the service. But since he was a recruit, Jodie Tipton said he wasn't getting permission to go to a VA hospital for appointments officials there said he needed to complete the process.

That's when Tipton requested to switch to the LDES program, and he was moved back into the rehabilitation platoon, according to a Marine official familiar with his situation. The Marine spoke on the condition of anonymity because they weren't authorized to discuss a recruit's medical situation.

The request to move to LDES “reset his clock,” the official said, since Tipton's paperwork had to go back to Washington, D.C., for review.

That's also when the Tipton family stopped getting clear updates on when he'd be separated, Jodie Tipton said.

“I just don't understand it dragging on so long,” she said. “We still didn't have a timeline. Is it still six to nine months … or three to six weeks? No one could tell us.”

Tipton still wants to serve in the military, she said. But recruits and their families deserve to know the military has clear processes for separating those too sick or injured to complete their training, she added.

“We've been asking since March 5 … what is the procedure for medical separation?” she said. “They kept telling us they had procedures in place, but nobody could give us a definitive answer on what that procedure was or where Alex was at in the process.”

Jodie Tipton said she understands the need to keep recruits who are going back to boot camp focused on what's ahead. But military leaders need to give the process another look for those who are going home, she added.

“We never thought he was away at camp or that they'd go gentle on him,” she said. “We wanted him to be prepared for whatever was required of him or any challenge he'd face going forward.

“But everything started breaking down when the separation process happened.”

— Gina Harkins can be reached at gina.harkins@military.com. Follow her on Twitter@ginaaharkins.