More than two weeks after a U.S. citizen fighting for the Islamic State surrendered to a Pentagon-backed militia in Syria,... 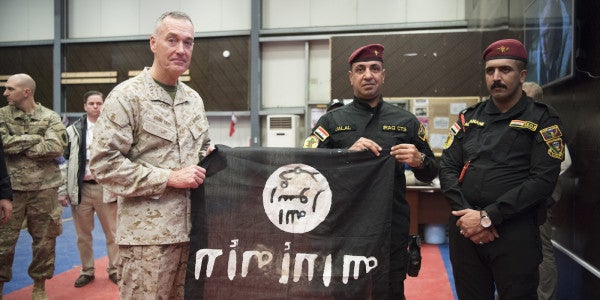 More than two weeks after a U.S. citizen fighting for the Islamic State surrendered to a Pentagon-backed militia in Syria, the American’s identity is still a mystery. But the International Committee of the Red Cross said Thursday that the U.S. had notified the organization of the capture and the two sides were arranging a visit.

In keeping with Red Cross practice, the organization declined to identify him. But Red Cross spokesman Marc Kilstein said in response to a question by the Miami Herald that the organization “has been officially notified of the detention of a U.S. citizen, captured in Syria and currently held by the U.S. authorities.”

“We are following up with the U.S. authorities to organize a visit, and anticipate being given timely access to visit the individual in accordance with U.S. law and policy as well as the ICRC’s own standard procedures for such visits, such as speaking with the detainee in private,” he added.

The Department of Defense, likewise, has been short on details about the man — his age, his name, where he is held, what would become of him — after initially disclosing the existence of the only known American citizen who is an Islamic State detainee in U.S. military custody. A Pentagon statement called him a “known enemy combatant” who was handed over to U.S. forces “on or about Sept. 21,” after he had surrendered to the Syrian Democratic Forces, a U.S.-supported Kurdish-dominated militia.

Air Force Maj. Ben Sakrisson, a Pentagon spokesman for detainee issues, confirmed that the U.S. military notified the ICRC “of the detention earlier this week.” He said Red Cross representatives are “expected to meet with the detained unlawful enemy combatant in the near future.”

He has consistently declined to give details about the man’s whereabouts, identity or other information, saying the U.S. had “no obligation to say anything since this is an ongoing operation.”

At the Central Command in Tampa, which supervises military operations against Islamic State forces, Army Maj. Josh T. Jacques confirmed that the captive is a man who “was fighting for ISIS.” But he said it would be up to Army spokesmen to say whether he was still in the Centcom area of operation stretching from northern Africa across the Middle East to Central and South Asia. An Army spokeswoman had not responded to a Herald inquiry as of Thursday afternoon.

The capture has created a policy conundrum for the Trump administration. President Donald Trump campaigned on a vow to load up Guantanamo with prisoners.

But if the American is to be charged with a crime, he cannot go to Guantanamo, where by law only non-citizens can be tried by military commission. Moreover, if he were to be sent to the war-on-terror detention center in southeast Cuba, he could not be later sent to a federal court for prosecution under a different provision of U.S. law enacted during the Obama administration that prevents the transfer of Guantanamo detainees to U.S. soil.

In New York, Hina Shamsi of the American Civil Liberties Union said the U.S. military should “immediately transfer him to the federal criminal justice system to face criminal charges. The United States does not have legal authority under its own domestic laws to hold ISIS fighters in military detention.”

The ACLU has long contended that Congress’ 2001 Authorization for the Use of Military Force, the basis for holding captives at Guantanamo, “does not in our view apply to ISIS, a group that did not exist at the time of the passage of the AUMF and has publicly opposed al-Qaida.” Those who disagree describe the Islamic State group as an offshoot of al-Qaida.

Another American who was captured fighting for the Islamic State, Mohammed Khweis, was convicted in federal court in June. The Justice Department said Kurdish Peshmerga military forces captured Khweis in March 2016, two months after Trump took office, and turned him over to federal authorities for prosecution.

Pentagon officials referred questions about the man’s case to the Justice Department, suggesting a federal prosecution was being considered. But Justice Department spokesman Wyn Hornbuckle declined to comment.