President Trump threatened to veto any defense bill that renames military bases and other assets named after Confederate generals. 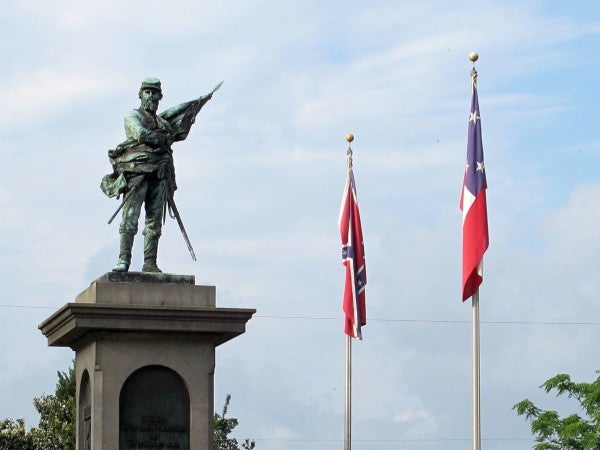 WASHINGTON — The Senate Armed Services Committee on Wednesday voted to require the Pentagon to rename military bases and other assets named after Confederate generals, a move that puts the Republican-led panel on a collision course with the White House.

The committee adopted an amendment to the annual Pentagon policy bill that gives the Defense Department three years to remove the names of Confederate generals from U.S. military assets, according to a source familiar with the closed-door proceedings.

The language, adopted by voice vote as President Donald Trump preemptively threatened to veto any defense bill that did just that, affects massive bases such as Fort Bragg in North Carolina and Fort Benning in Georgia. But it also goes further and includes everything from ships to streets on Defense Department property.

Massachusetts Democratic Sen. Elizabeth Warren offered the provision, which she previewed on Twitter.

“I filed an amendment to the annual defense bill last week to rename all bases named for Confederate generals. It’s long past time to end the tribute to white supremacy on our military installations,” Warren tweeted Tuesday, though it was not clear at the time if the amendment would be offered, or if it had any chance of success.

The Massachusetts senator, a former presidential hopeful, tweeted in response to an opinion piece published by The Atlantic from retired Gen. David Petraeus, calling for renaming military forts.

“As I have watched Confederate monuments being removed by state and local governments, and sometimes by the forceful will of the American people, the fact that 10 U.S. Army installations are named for Confederate officers has weighed on me,” Petraeus wrote.

The amendment would require the Defense Department to set up a commission to develop a plan to implement the renaming, according to the source familiar with the text.

Wednesday’s scheduled White House press briefing was delayed while the administration prepared a statement expressing Trump’s opposition to renaming as many as 10 military bases, citing by name Fort Bragg and Fort Benning, as well as Fort Hood in Texas.

“The president will not be signing legislation that renames America’s forts,” White House press secretary Kayleigh McEnany said in response to a question from CQ Roll Call. “Fort Bragg, for example, it’s one of the largest military installations. It’s home to tens of thousands of brave American soldiers, and when you think of Fort Bragg, we think of the brave soldiers that deployed from there.”

The effective veto threat sets up a standoff with Capitol Hill, with House Democrats likely to advance similar provisions in that chamber’s defense authorization, especially after the Senate committee action.

This would be the 60th consecutive year for the defense authorization to become law, if it makes it that far.

Elsewhere in Congress, Speaker Nancy Pelosi of California has formally requested the removal of 11 Confederate statues from the National Statuary Hall Collection.

“While I believe it is imperative that we never forget our history lest we repeat it, I also believe that there is no room for celebrating the violent bigotry of the men of the Confederacy in the hallowed halls of the United States Capitol or in places of honor across the country,” the speaker wrote in a letter to the leaders of the Joint Committee on the Library, which is overseen by the leadership of the House Administration Committee and the Senate Rules and Administration Committee.

But the adoption of the amendment at the Senate Armed Services panel Wednesday has ramifications far beyond the Capitol itself, with an array of Defense Department properties bearing the names of those who took up arms for the Confederacy and against the Union.

The showdown comes amid the administration’s aggressive response to nationwide protests following the May 25 killing of George Floyd, an African American man, by a Minneapolis police officer.

Among those most critical of Trump was his first defense secretary, Jim Mattis, a retired four-star Marine general who has significant support from both parties on Capitol Hill.