Troops Most At Risk Of Suicide Don’t Get The Support They Need From The Military, New Report Says

A new report on post-traumatic stress disorder and depression among active-duty service members found that Department of Defense healthcare providers... 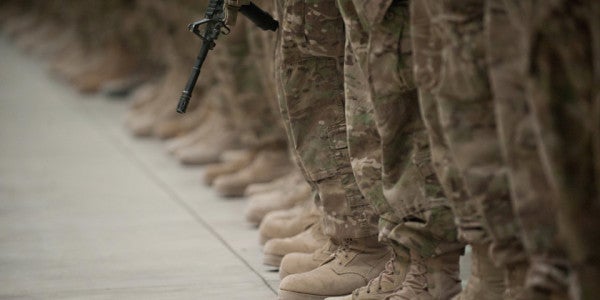 A new report on post-traumatic stress disorder and depression among active-duty service members found that Department of Defense healthcare providers failed to adequately follow up with those who were at a high risk of suicide. The Aug. 7 RAND report, Quality of Care for PTSD and Depression in the Military Health, found that almost half of service members with PTSD and 70% of those with depression did not receive adequate care from the Military Health System after they were found to be at risk of harming themselves.

The report, commissioned by the Pentagon, looked at 39,000 service members who had been diagnosed with depression, PTSD, or both in 2013.

While military healthcare providers did a good job of scheduling follow-up visits, preventing an active duty service member from gaining access to a lethal means appeared to be problematic, explained Kimberly Hepner, a senior behavioral scientist at the RAND corporation and lead author of the study.

“For service members who do actually die by suicide, the most frequent way is with a firearm,” Hepner told Task & Purpose, adding that for providers this means asking service members about their access to their firearms, and attempting to find a way to limit that access while they’re at increased risk.

Due to concerns over how this might adversely impact a service member’s career, coupled with the stigma associated with PTSD and depression, “that can be a difficult conversation to have,” Hepner said, adding that for many service members, their duties may require the use of a firearm, and limited access would likely require command notification.

Among the service members documented in the report, the vast majority were on their second or third enlistment, had at least one deployment under their belts, and an average of 20 months downrange.

Related: Is A New Military Oath Really The Best We Can Do To Fight Veteran Suicide? »

“What we do know is true is that with each successive deployment, service members and veterans have an increased rate of PTSD and related conditions,” Kris Goldsmith the Assistant Director for Policy and Government Relations with Vietnam Veterans of America told Task & Purpose. “What we need to get past is treating service members as if they’re disposable.”

“We need to be more focused on recovery,” Goldsmith continued. “It seems like DoD is pushing its problems onto rather than maintaining the veterans who have already been trained and focus on keeping them in the military.”

More than 2.6 million service members deployed to Afghanistan and Iraq between 2001 and 2014, and estimates of the rates of PTSD following military service there fluctuates dramatically between 4 and 20%, the report notes.

“It’s not just the military and veterans community who are aware of PTSD these days, it’s part of the American lexicon, the general public I think has a broad understanding that PTSD and depression are legitimate health concerns that reduce the combat effectiveness of the force,” Goldsmith said. “In order to have a ready force, we need to make sure we take care of the people who make up the United States military.”