Fort Bragg’s Golden Knights frequently display unworldly talent as they perform around the globe. But are they aliens? Definitely not.... 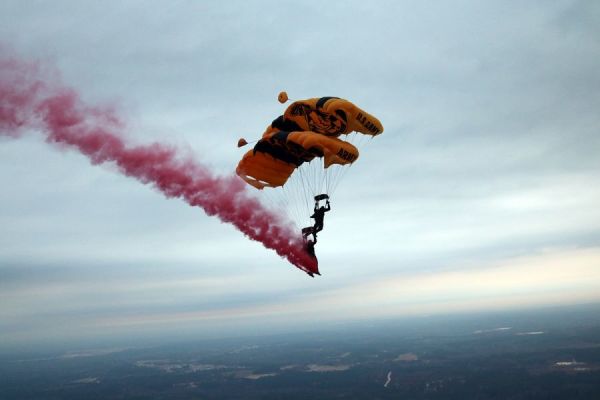 Fort Bragg’s Golden Knights frequently display unworldly talent as they perform around the globe. But are they aliens?

Definitely not. The Golden Knights, also known as the U.S. Army Parachute Team, are highly trained soldiers who have wowed crowds at air shows, international competitions and sporting events for nearly 60 years. They also perform on and around Fort Bragg — where they are based — throughout the year.

But at least one person in the Knights’ own backyard confused the paratroopers for a UFO.

On Dec. 1, a user of the website ufostalker.com reported a sighting at about 5:25 p.m. on Nov. 30. The website is a real-time tracking system based on reporting to the Mutual UFO Network, or MUFON.

“[Five] burning orbs appeared to be coming through the atmosphere before rapidly changing directions, both descending and ascending,” the user wrote. “[Three] more orbs came in and did similar things before this.”

The date and time of the sighting corresponds to Fort Bragg’s annual Christmas tree lighting ceremony. The event draws thousands to the Main Post Parade Field each year for family-friendly events, including musical performances, an appearance by Santa Claus and a jump by the Golden Knights.

The report at ufostalker.com includes a video of the sighting, which clearly matches videos taken of the Golden Knights at the tree lighting event, including one posted by this reporter during the tree lighting ceremony.

The Golden Knights are well-known around the world.

Millions of people see them perform each year. They have also earned more than 2,000 gold medals in international and national competitions and nearly 2,000 silver and bronze medals, too.

But, by design, most of their jumps take place in daylight.

The Nov. 30 jump was a rare exception.

Before they could light the post Christmas tree, officials needed the skies to darken. So, naturally, the Golden Knights jumped as night fell on the nation’s largest military installation.

And they compensated for the lack of visibility by strapping on flares.

It made for quite the show. And to at least one person, it was an out-of-this-world experience.