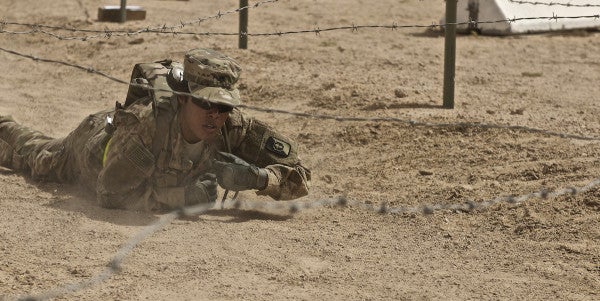 While U.S. Defense Department officials have made clear it has no problem with requiring women to register for the draft, lawmakers in Congress appear poised to dodge the issue in the upcoming battle over the defense policy bill.

House and Senate negotiators plan to shelve the provision in the Senate version of the National Defense Authorization Act in favor of ordering up a study of the issue, sources told Politico and the Washington Examiner.

“Neither majorities support it,” a source told Politico. “There's bigger things to worry about” in the $602 billion defense bill proposed by the Pentagon and the White House.

Related: It’s Time We Require Women To Register For The Draft »

A spokesman for the House Armed Services Committee declined to comment on whether the proposal to have women register for the draft would be scrapped but said a House and Senate conference committee would take up the legislation when Congress returns next week.

Congress passed a stopgap spending measure known as a continuing resolution, or CR, in September to avoid a government shutdown before they recessed to campaign for re-election The measure will expire in early December, and it was unclear whether they would be able to pass an NDAA in the lame-duck session or settle on another CR until the next president is inaugurated.

Democratic presidential candidate Hillary Clinton has backed having women register for the draft. “I do support that,” she told the Huffington Post last June.

Republican candidate Donald Trump's position on the issue is less clear. His website on issues doesn't address the draft.

In a town hall meeting in Virginia last month, Trump was asked by a veteran about the “social engineering” in the military that the veteran claimed had opened up combat roles to women and the possibility that women would have to register for the draft. “Well, we're going to get away from political correctness, and we are going to have to do that,” he said, according to The Washington Post. “We have a politically correct military, and it's getting more and more politically correct every day.”

Last December, Defense Secretary Ash Carter ended the combat exclusionary rule for women and opened up all military jobs to women in the military who qualify. The Senate Armed Services Committee then said that Carter's action had removed any justification for limiting draft registration to men.

“The fact is every single leader in this country, both men and women, members of the military leadership, believe that it's fair since we opened up all aspects of the military to women that they would also be registering for Selective Services,” said Sen. John McCain, an Arizona Republican and chairman of SASC.

The NDAA bill passed by the full Senate would require women turning 18 on or after Jan. 1, 2018 to register for Selective Service. Failure to register could result in the loss of various forms of federal aid, including Pell grants. Because the policy would not apply to women who turned 18 before 2018, it would not affect current aid arrangements.

Last February, shortly after Carter opened up combat roles to women, two House Republicans opposed to Carter's action introduced a bill titled the “Draft America's Daughters Act of 2016” that would require women to register with the Selective Service System.

The bill offered by Rep. Duncan Hunter, a California Republican, and co-sponsored by Rep. Ryan Zinke, a Montana Republican, would “amend the Military Selective Service Act to extend the registration and conscription requirements of the Selective Service System, currently applicable only to men between the ages of 18 and 26, to women between those ages to reflect the opening of combat arms Military Occupational Specialties to women.”

Hunter, a Major in the Marine reserves and a veteran of Iraq and Afghanistan, and Zinke, a retired Navy SEAL Commander who served in Iraq, both said they were opposed to their own bill but argued that a debate in Congress was necessary on lifting the combat exclusion rule for women.

Carter, the service secretaries, and the service chiefs have made clear that requiring women to register for the draft was up to Congress, and they have yet to voice any opposition to such a move.

Last year at the Aspen Security Forum in Colorado, retired Adm. Eric Olson, the former commander of Special Operations Command and a legendary figure in the Special Ops community, offered up the same complaints about women in combat made by Hunter and Zinke and asked: “Are we willing to cause every 18-year-old girl to sign up for Selective Service?”

At a separate panel, Air Force Secretary Deborah Lee James shrugged off Olson's remarks and said “I see no reason why not to have that requirement (registration) for men and women.”