Retired Lt Gen Hal Moore, Depicted In ‘We Were Soldiers,’ Dies At 94

Retired Lt. Gen. Hal Moore, the commander at the Battle of Ia Drang in 1965 that led him to co-author … Continued 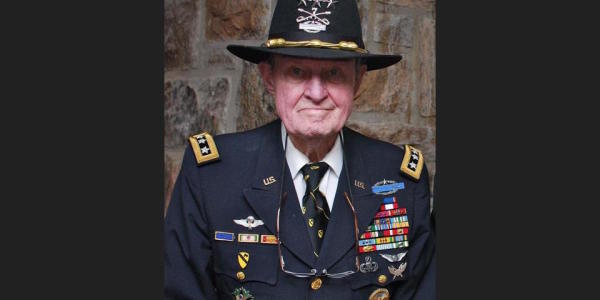 Retired Lt. Gen. Hal Moore, the commander at the Battle of Ia Drang in 1965 that led him to co-author the book, “We Were Soldiers Once and Young,” died Friday at his home in Auburn, Ala. He was 94.

Moore graduated from the U.S. Military Academy at West Point in 1945, and was commissioned as a second lieutenant in the infantry. He served with the 187th Glider Infantry Regiment in Sapporo, Japan. He was later reassigned to the 82nd Airborne Division at Fort Bragg, N.C., where he he jump-tested experimental parachutes and made more than 130 test jumps in two years.

He commanded a heavy mortar company and an infantry company in the 17th Infantry Regiment, 7th Infantry Division, and commanded a battalion in the newly formed air mobile 11th Air Assault Division.

During the Vietnam War, he served as the commander of the 1st Battalion, 7th Cavalry Regiment, and led his unit in the Battle of Ia Drang in 1965, which was the basis of his book “We Were Soldiers Once, and Young,” which he co-authored in 2001 with former war correspondent Joe Galloway.

In 2002, the book became a movie, “We Were Soldiers,” in which Mel Gibson played Moore and Sam Elliott played Moore’s command sergeant major, Basil Plumley.

Arrangements are still incomplete but a funeral mass will be held at St. Michaels Roman Catholic Church in Auburn. A memorial service and burial will follow at Fort Benning.