For more than a year, Donald Trump has rallied supporters by vowing to build a “big beautiful” wall along the... 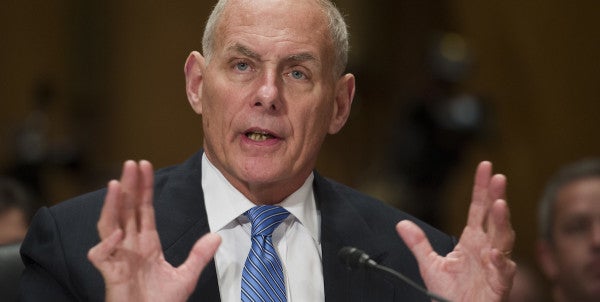 For more than a year, Donald Trump has rallied supporters by vowing to build a “big beautiful” wall along the nearly 2,000-mile-long border with Mexico, calling it crucial to stop migrants, drugs and criminals from entering the United States.

John Kelly, the president-elect’s choice to head the Department of Homeland Security, which is responsible for guarding the nation’s borders, said Tuesday that a wall won’t solve the problem.

Kelly, a retired four-star general, told his Senate confirmation hearing that cutting the flow of migrants and illegal drugs would require addressing rising violence and lack of opportunity in poverty-stricken countries in Central and South America, not just building a wall.

“A physical barrier in and of itself will not do the job,” Kelly told the Senate Homeland Security and Governmental Affairs Committee. “It has to be really a layered defense.”

He called for increasing counternarcotics aid, investment and other assistance to Central America and as far south as Peru and Colombia, as well as for creating a “drug demand reduction campaign” in the United States.

He said most migrants from the region who enter the U.S. are looking for jobs and to escape drug-fueled gang violence back home.

In written answers to committee questions, Kelly said he had “only briefly discussed the wall with” Trump and had “no discussions” with him about who would pay for it.

Rather than building a single long wall, he suggested one that would “funnel the flow in certain directions and into specific cul-de-sacs” as part of a multilayered defense that would include more border patrols, aerial drones, ground sensors and other devices.

Kelly is expected to win easy Senate confirmation. No lawmaker on the panel voiced opposition to him.

If confirmed, he would be the fifth head of a massive department that was cobbled together from 22 agencies after the terrorist attacks of Sept. 11, 2001.

It now has an annual budget of $41 billion and 240,000 employees who are responsible for border security, immigration control, cybersecurity, screening passengers at airports and other tasks.

The sharpest questioning came from Sen. Kamala Harris, D-Calif., who was elected in November, over the future of the Deferred Action for Childhood Arrivals program.

DACA, as the program begun by President Barack Obama is known, defers deportations for hundreds of thousands of undocumented immigrants who arrived in the U.S. as children, grew up here and committed no crimes.

Harris pressed Kelly about whether he would use the DACA information to identify and deport people. She asked him to honor the Obama administration’s promise not to use DACA applications to assist in deportations.

Kelly said convicted criminals and other categories of undocumented immigrants might be a higher priority for removal, though he acknowledged he had not had discussions with Trump’s advisers about immigration policy.

“There’s a big spectrum of people who need to be dealt with in terms of deportation,” he said. “I would guess that (DACA applicants) might not be the highest priority” for deportations, Kelly said. He added, “I promise you that I will be involved in the discussion.”

Kelly also seemed to raise questions about Trump’s vow to use “extreme vetting” of refugees and immigrants to prevent Islamic militants from entering the country.

“You can’t guarantee 100 percent, and if you are taking in large numbers of people from places where you really can’t vet them very well you do the best you can,” Kelly said.

A native of Boston, Kelly enlisted in the Marine Corps in 1970 after high school and became an officer after graduating from the Naval Academy.

Known for his blunt, hard-driving style, he served three tours in Iraq. His son, Marine Lt. Robert Kelly, was killed in November 2010 in Afghanistan.

Kelly has experience in Washington as a top military aide to two Defense secretaries, and as a Marine Corps liaison to Congress. He served as head of U.S. Southern Command before he retired.

The Pentagon command is responsible for U.S. military operations in Latin America and the Caribbean and works closely with the Department of Homeland Security to combat human trafficking and drug smuggling.

Lawmakers from both parties noted that Kelly’s time at Southern Command prepared him for many of the same problems he would confront at Homeland Security.

Like Trump, Kelly made clear that he believed tougher measures were needed to interdict migrants crossing the southwest border from Mexico.

He recounted visiting the border with law enforcement officers recently and observing several people climb over a chain-link fence, part of the barriers that already exist along parts of the border.

He said the officers did not move to arrest the fence-jumpers.

“What’s the use?” he said, describing the officers’ attitude of the futility of holding back migrants. “That’s not good for morale.”

If confirmed, he said his priority would be to “let the people who are tasked with protecting the border do their job.”

Border Patrol agents and other U.S. authorities apprehended 408,870 people on or near the border — including 137,366 children and their families, mostly from Central America — in the just-ended 2016 fiscal year, according to U.S. records.

Most of those apprehended in the last year came from Honduras, El Salvador and Guatemala, countries struggling with drug-related violence and extreme poverty.

Net migration from Mexico has remained in negative territory for several years, according to U.S. and Mexico census data, with more people returning home to Mexico than entering the U.S. illegally each year.