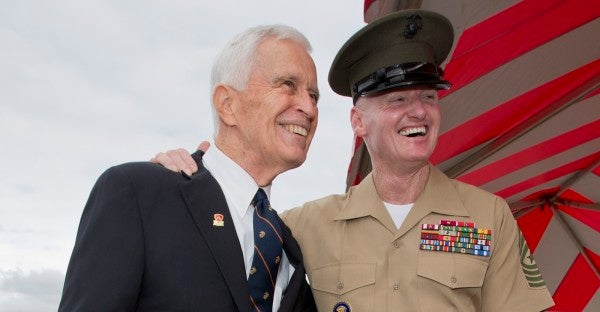 Stackpole served from 1998 to 2005 as president of the center, a Defense Department effort at Fort DeRussy that supports U.S. Indo-Pacific Command’s objective of developing professional and personal ties among national security establishments to foster stability in the region.

Stackpole was in the Marine Corps for 37 years, retiring in 1994. His last active duty assignment was as the commander of Marine Corps Forces Pacific at Camp H.M. Smith on Oahu.

“We will miss you Hank and as evident from the reflections by those that served with you at our center – you were already light-years ahead in living Ike Pono (knowing what is right) one small Aloha step at a time. Semper Fi Hank, Semper Fi Marine!” center Director Pete Gumataotao said in a release.

Following the “non-attribution” custom at the Asia-Pacific Center, unidentified staffers offered reflections on Stackpole including: “He was a good mentor and a great guy for the center. He set the standards in the beginning. A super nice guy who wanted to always do the right thing. He understood the value of the center’s unique role in building relationships with international partners. He was big in developing these relationships face-to-face.”

The Asia-Pacific Center offered condolences to Vivien Stackpole. The couple was married for more than 55 years.

In 1967, Stackpole was serving as a company commander with the 3rd Battalion, 5th Marines in Vietnam when his unit ran into the 3rd North Vietnamese Regimental Headquarters and he was hit in the leg by a 50-caliber bullet — a very large round.

“Stackpole’s team was able to remove him from the line of fire and load him on a Dust Off chopper for evacuation to the nearest field hospital,” Vachon wrote. “The Dust Off took off and was starting to gain altitude when it was brought down by enemy fire. Of the nine men on the Dust Off, Stackpole was the only one to survive the crash. Stackpole managed to pull himself out of the wreck and crawl some 70 feet from the wreck when it burst into flames.”

According to a 2002 Honolulu Star-Bulletin story, Stackpole was again picked up by a helicopter that was also hit by enemy fire on takeoff.

Stackpole related at the time of the newspaper story that by some miracle, the pilot flew the chopper to safety and saved the lives of all aboard.

Stackpole said he was put in a stage 3 triage at Chu Lai as “one of those who wasn’t going to make it. I had no pulse and no blood pressure, but I was still awake and aware.”

A chaplain kept telling corpsmen standing by, “He’s alive, he’s alive,” Stackpole said. They kept saying, “It’s a waste of time,” but eventually sent him to the hospital.

He experienced two cardiac arrests on the operating table at Clark Air Force Base in the Philippines, but he woke up two days later.

Stackpole assumed command of Marine Corps Forces Pacific in July 1992, according to the Marine Corps University. He previously commanded Joint Task Force Sea Angel in Bangladesh during humanitarian relief operations in May and June 1991 in the islands and eastern coastal area of the Bay of Bengal.

In 1990, Stackpole was commander of Marine Corps bases in Japan. With the fall of the Soviet Union, Russia was slashing military spending and withdrawing troops from Europe, a Washington Post story noted.

Stackpole said U.S. forces were still needed in Japan, noting that Asia was developing so quickly that “it makes your head swim,” but that the Philippines remained a “basket case” because of official corruption and a widening gap between rich and poor.

Stackpole’s decorations included the Silver Star for “conspicuous gallantry and intrepidity in action,” Defense Superior Service Medal with oak leaf cluster, Legion of Merit, the Purple Heart with gold star, the Government of Japan Order of The Rising Sun, and the Vietnamese Cross of Gallantry, Vachon said.

In 2010 Stackpole was president of the Iwo Jima Association of America.

A 2013 state House resolution recognizing Vietnam veterans who continued to give back to Hawaii said Stackpole “remains active in the local community by serving on numerous community boards, being active in the Boy Scouts, and striving towards ensuring that wounded warriors returning from combat get the help they need.”