Secretary of State Rex Tillerson warned Friday that “all options” are being considered to counter North Korea’s emerging nuclear threat,... 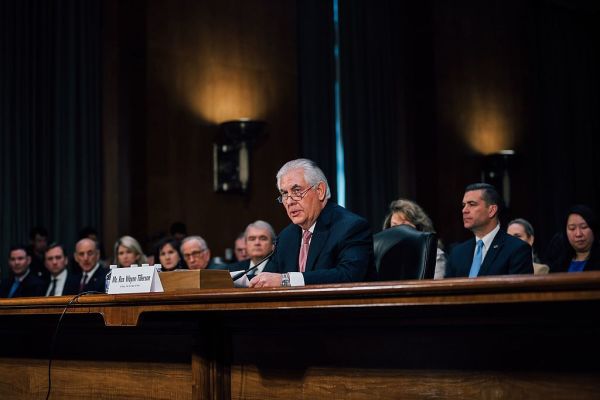 Secretary of State Rex Tillerson warned Friday that “all options” are being considered to counter North Korea’s emerging nuclear threat, including a militarily strike if necessary to safeguard allies and tens of thousands of U.S. troops stationed in the region.

The threat of a full-scale U.S. military attack comes after a series of North Korean ballistic missile tests in recent weeks have heightened tensions across northeast Asia and raised the possibility of a conflict with an adversary that now possesses nuclear arms and appears close to being able to strike U.S. territory.

The tough talk appears to be a break from previous U.S. administrations, which emphasized diplomacy, economic sanctions and covert operations, including cyberattacks, to try to reduce the danger from one of the world’s most isolated, and unpredictable, dictatorships.

“Certainly we do not want for things to get to a military conflict,” Tillerson told reporters in Seoul on the second leg of his three-nation visit to Asia, his first to the region since taking office.

“We’ve been quite clear on that in our communications. But obviously if North Korea takes actions that threaten the South Korean forces or our own forces, then that will be met with an appropriate response,” he added.

“Let me very clear: The policy of strategic patience has ended,” he said, referring to the Obama administration’s policy of trying to wait out the North Korean regime while pressing it with economic sanctions and covert actions.

He emphasized the need for maintaining economic sanctions on Pyongyang but also made clear that the Trump administration would not be limited to that approach.

“We’re exploring a new range of diplomatic, security and economic measures. All options are on the table,” he said.

He also appeared to reject the idea of trying to negotiate a freeze in North Korea’s weapons program, a policy that the Clinton administration tried in the mid-1990s by supplying oil and other aid to Pyongyang in an effort to block its nuclear development.

The deal eventually broke down and North Korea has built a sizable nuclear stockpile. Its most recent nuclear test, last September, was said to produce a yield larger than the nuclear bomb that the U.S. dropped on Hiroshima in 1945.

“At this stage, I’m not sure we would be willing to freeze with the circumstances where they exist today, given that would leave North Korea with significant capabilities that would represent a true threat not just to the region but to American forces as well,” Tillerson said.

In a sign of the growing friction, the North Korean Embassy in Beijing invited reporters in for a rare news conference to blame the United States for risking a nuclear war. The officials also vowed to continue Pyongyang’s fast-developing nuclear testing program.

For his part, President Donald Trump declared on Twitter that North Korea was “behaving very badly” and dismissed Chinese efforts to engage Washington and Pyongyang in talks aimed at easing tensions.

Tillerson’s remarks, standing beside his South Korean counterpart, Foreign Minister Yun Byung-se, came a day after he declared in Tokyo that two decades of U.S. attempts to block North Korea from developing nuclear weapons had failed and that a “different approach” was required.

Earlier in the day, Tillerson toured the Demilitarized Zone, a heavily guarded buffer of border land between North and South Korea intended to diffuse tensions after the 1953 armistice that halted fighting during the Korean War. The two nations have never signed a formal peace accord.

Tillerson ate lunch with U.S. troops there and signed a brick with chalk, a tradition for dignitaries who visit the site.

Tillerson’s tour of the region comes as the U.S. military is participating in a two-month exercise with South Korean and Japanese forces, an annual exercise that North Korea routinely denounces as a prelude to war.

The Foal Eagle exercise involves fighter jets, submarines and ground forces involved in a range of complex drills. About 3,600 U.S. service members were deployed for the event, joining the 28,000 U.S. troops permanently based in South Korea.

Capt. Jeff Davis, a Pentagon spokesman, told reporters Friday that the U.S. military has a number of plans in place in the event of hostile North Korean military action. He would not directly comment on the possibility of a preemptive U.S. attack.

“I’ll let Secretary Tillerson talk for U.S. policy,” Davis said. “Our job is to provide military options that give strength to foreign policy that he leads.”

Tillerson’s meeting in Seoul comes at a time of political upheaval in South Korea. Its president was removed from office last week amid a corruption scandal that threatens nearly a decade of conservative party rule. New elections are scheduled for May 9.

The leading candidate in the polls, Moon Jae-in of the Democratic Party, says he wants to delay installation of a new U.S. anti-missile system, known as THAAD, which is intended to shoot down North Korean missiles.