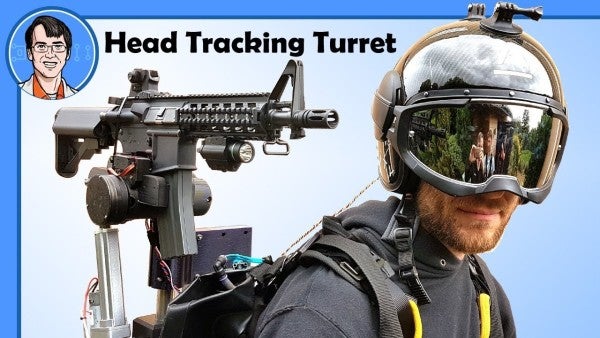 A YouTube video published on Oct. 7 shows Browning operating the Deadalus exoskeleton with a shoulder-mounted weapons turret consisting of a select-fire airsoft rifle controlled through movements of the suit's helmet, not unlike the helmet-mounted displays currently employed by the U.S. armed forces

The shoulder turret was fabricated by James Bruton, an engineer and 3D-printing expert, although Guns.com
notes that Browning company Gravity Industries “made it clear that the addition of the weapon is merely for entertainment reasons only.”

And with good reason: As you can tell from the video, the rifle turret's current configuration doesn't yet have the clearance to avoid potentially injuring an operator when rocking live ammo. Still, the sight of a shoulder-mounted weapons turret on an ostensible flying suit is exciting to watch.

Browning has been a busy bee in recent months when it comes to potential military applications of his tech. In late July, Gravity Industries
conducted a short test flight from the Royal Navy's HMS Dasher (P280), launching from the patrol using his six-turbine rig and training vessel to a smaller rubber motorboat before circling the two.

“Being in command of Dasher while the Gravity Industries team were onboard was very different and a new challenge which I was honored to take on,” Lieutenant Lauren Webber
said in a statement at the time “Taking off and landing on the P2000 [Archer-class vessel] look so easy, despite the ship traveling at 20 knots.”

The previous May, personnel from 539 Assault Squadron, 1 Assault Group Royal Marines (1AGRM) — the training unit responsible for small boat amphibious and riverine operations —
tested out the Browning's jet-powered suit as part of its mission to reimagine the future of amphibious assaults.

“This has been about exploring how we can take surface forward and all the different technologies that are out there,” as 1AGRM's commanding officer Col. Chris Haw
told Maritime Executive at the time.

Does this mean that Royal Marines will start flying armed Daedalus jetpacks into battle? It seems unlikely at the moment, but it's good to see that the dreams of a real-life War Machine armor are alive and well.