A Maryland man has been convicted of first-degree murder in the killing of Army 2nd Lt. Richard Collins III, who was stabbed at a bus stop in College Park in 2017 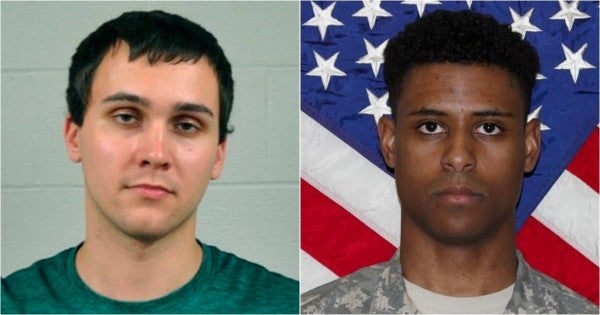 A Maryland man has been convicted of first-degree murder in the killing of Army 2nd Lt. Richard Collins III, who was stabbed at a bus stop in College Park in 2017.

Sean Urbanski was found guilty of first-degree murder in the killing, the jury announced Wednesday after deliberating for two hours.

Prince George's County prosecutors will seek a sentence of life without parole for the first-degree murder conviction, Braveboy said during a press conference.

A sentencing hearing is scheduled for April 16.

Urbanski was charged with first-degree murder and a hate crime for fatally stabbing Collins in the chest in the early morning hours of May 20, 2017. Prosecutors argued Urbanski was “poisoned” by hatred and targeted Collins because he was black. But following testimony, the judge threw out the hate crime charge Tuesday, ruling the state failed to provide sufficient evidence for the charge.

Prince George's County prosecutors now say they want to changes to the state's hate crime law to broaden when the charge can be applied.

“Because of this case,” Braveboy said, “I believe that we will be able to make changes in Annapolis with respect to our hate crime statute

Securing a conviction for first-degree murder is not easy and the case could have lasting effects, Braveboy said.

Before jurors went into deliberation, prosecutors made their case for first-degree murder instead of a lesser charge, asking members of the panel to consider their arguments that Urbanski's killing of Collins was premeditated.

Defense attorneys told the jury there is no denying a crime was committed by Urbanski, but it was the act of a drunk, angry man, not one planning to kill someone.

The jury determined that Collins' killing was planned when Urbanski, a University of Maryland student, left the bus stop where Collins was standing with friends and returned with his knife drawn.

University students were out drinking to celebrate graduation the night of the attack. Collins, a ROTC student and newly commissioned Army officer, was a few days away from graduation at Bowie State University.

Supporters of the Collins' family embraced after the verdict. Urbanski's mother wept.

The world lost “a hero, our hero, this country's hero,” said his father Richard Collins Jr. at a subsequent news conference.

Collins' parents said they are pleased with the outcome of the case. They plan to join Prince George's county prosecutors in advocating in Annapolis for changes to the state's hate crime statutes.

“Our hearts are broken.” Collin's Jr., Richard's father said. “We want the world to know we are going to continue to fight for his legacy.”

Braveboy said a person should be charged with a hate crime if intolerance is one of the reasons for the crime, rather than the only reason. That's why her office plans to push the General Assembly to amend and broaden the language of the state's hate crime statute.

Defense attorneys argued that Urbanski was “out-of-his mind” and “stupid” drunk to the point he took a life without knowing what he was doing. Pointing to an estimate of Urbanski's blood alcohol concentration at the time of the event, witness testimony and video surveillance of Urbanski rambling and singing to himself in a jail cell an hour after the attack, his lawyers said Urbanski did not have the mental capacity to plan out a premeditated murder.

“The poison is not hate, it's alcohol,” said defense attorney John McKenna.

Prosecutors issued a rebuttal Wednesday and called another witness to the stand. Po Sen Chen testified to seeing Urbanski at the bar the night of the incident and said he “didn't seem visibly drunk.”

Urbanski was hiding in the shadows, took out his knife, approached and deliberately killed Collins, a black man, prosecutors said Wednesday.

Urbanski had left the bus stop where Collins and his friends Blake Bender, a white man, and Amanda Lee, an Asian woman, were waiting for an Uber. Urbanski then returned to the bus stop carrying a knife, walked up to the group and stabbed Collins after warning: “Step left, step left, if you know what's best for you.”

Prosecutors said Wednesday that Urbanski had enough time to consider his actions when he left the bus stop and came back with the blade of his pocket knife out. Urbanski belonged to a racist Facebook group called “Alt-Reich: Nation” and had several racist images, or memes, saved on his phone.

The defense questioned why the state didn't call a witness who could speak to Urbanski's mental state the night of the incident. Prosecutors showed the jury police body camera footage of Urbanski listening and following commands of police officers after the attack, arguing that Urbanski could walk, talk and interact with others.