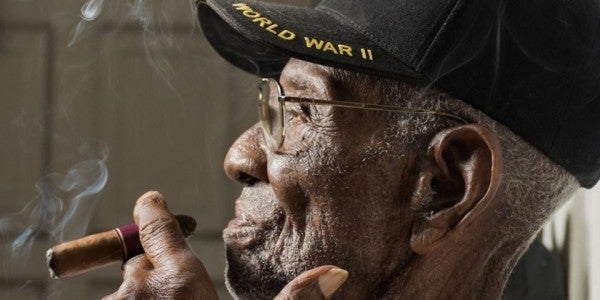 AUSTIN, Texas — Richard Overton, who was America's oldest man and oldest war veteran, died Thursday in Austin. Overton, who was honored for his military service and beloved for his propensity to enjoy his supercentenarian status with a cigar in one hand and a glass of whiskey in another, was 112 years old.

He died Thursday evening at a rehabilitation facility in Austin, said his cousin Volma Overton Jr. Before entering the rehab facility on Christmas Eve, he had been hospitalized with pneumonia at St. David's Medical Center for more than a week.

Overton was well-known to his neighbors, who often chatted with him on his porch in East Austin during the 72 years he lived there. Over the past few years, people from all over the country got a chance to know him as well, as he received increasing national attention for his age and his service in World War II.

For several of his recent birthdays, he welcomed the community into his front yard to celebrate. People from all over Central Texas arrived to say hello and gift him a birthday card — or, if they knew Overton's favorite pastimes, a bottle of whiskey or a box of cigars.

During Richard Overton's 111th birthday celebration, Volma Overton Jr. said it felt like Christmas, watching everyone line up to take a photo and share a gift with his cousin.

“It looks like everybody's getting ready to take a picture with Santa Claus — and he never turns anyone down,” Volma Overton said. “He's an open person to everybody, and he wanted everyone who was in town who wanted to come by to come by.”

Richard Overton in 2015US Army

Born in St. Mary's in Bastrop County on May 11, 1906, Richard Overton enlisted in the Army in 1942, nine months after the Pearl Harbor attack. He served in the Pacific theater — including Guam, Okinawa and Iwo Jima — until 1945, when he left the service.

Overton told the Austin American-Statesman's Ken Herman in 2013 that he had landed on more beaches under fire than he could remember. He also remembered ducking bullets in foxholes and clearing bodies from fields of battle.
After the war, he worked in furniture stores and later the state treasurer's office when future Texas Gov. Ann Richards ran the agency.

Well into his triple digits, Overton enjoyed cigars, a habit he picked up as a teenager, and occasionally a little whiskey would accidentally spill into his coffee. He reportedly drove until he was 107.
In 2013, he met President Barack Obama and Vice President Joe Biden at the White House. That year, the Austin City Council proclaimed the veteran's birthday “Richard A. Overton Day.” Council members passed a resolution to give Hamilton Avenue — the street on which Overton lived — the honorary name Richard Overton Avenue.

“He considers himself our neighborhood watchdog, and he knows everything that's going on,” neighbor Helen Elliott told the American-Statesman in 2016. “I don't think the neighborhood would be what it is without him. He's our legend, our icon.”

In one of his last public appearances, Overton was honored in March 2017 with a standing ovation at a San Antonio Spurs game. Overton was presented with a custom camouflage Spurs jersey with his name and the number “110,” his age at the time.

Overton was featured in local, regional and national publications and was the subject of the short documentary “Mr. Overton.”

In 2016, his family launched a GoFundMe page to ensure that Overton received around-the-clock home health care and could remain at home for the rest of his days. Donations poured in from all across the country to help make that happen.
Information about funeral arrangements was not immediately available.
———
©2018 Austin American-Statesman, Texas. Distributed by Tribune Content Agency, LLC.