Ricky Best, One Of The 2 Men Killed In Portland Stabbing, Was An Army Veteran

The horrific scene unfolded on a crowded MAX train in less than 10 minutes between stops at the start of... 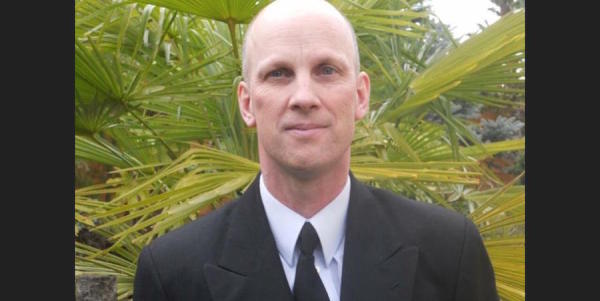 The horrific scene unfolded on a crowded MAX train in less than 10 minutes between stops at the start of a long holiday weekend.

A known extremist terrorized a teenage girl wearing a hijab and her friend, then turned his rage on an Army veteran, a recent Reed College graduate, and an aspiring poet who just tried to calm him down, police and witnesses said.

Police say Jeremy Joseph Christian, 35, cut all three men in the neck, leaving two dead and another injured from knife wounds. The rampage, unlike anything the city has seen, stunned city leaders and left friends and strangers mourning the loss of two lives, applauding the selfless acts of heroes and condemning the racist vitriol that preceded the violence.

Ricky John Best, 53, of Happy Valley, Taliesin Myrddin Namkai-Meche, 23, of Southeast Portland, and Micah David-Cole Fletcher, 21, of Southeast Portland, intervened Friday when Christian, a man known to police and others for his hate speech and extremist views, launched a slur-filled diatribe at the girl wearing a hijab and her friend after he boarded the MAX Green Line at Lloyd Center, police and witnesses said.

The three men tried to talk Christian down as they rode the train eastbound to Northeast Portland's Hollywood neighborhood.

Best, a technician for the city's Bureau of Development Services and a 23-year retired Army veteran, died on the train as Christian fled, police said. He retired from the United States Army as a platoon sergeant for Corps maintenance in 2012 after 23 years in the military.

Namkai-Meche, who graduated from Reed with a degree in economics in 2016, died a short time later at a hospital. Fletcher, a poet and Portland State University music student, remained hospitalized Saturday and is expected to live.

Fletcher told his girlfriend Miranda Helm he was on his way to his job at a pizza shop from classes at Portland State University when Christian started yelling at the girls and he attempted to come to their aid.

Fletcher's jaw was broken and neck punctured, she said, and surgeons had to remove bone shards from his throat.

“It's kind of a miracle that he survived it,'' she said.

Oregon Gov. Kate Brown said she was heartbroken by the horrific deaths of the two Good Samaritans.

“What happened yesterday is a crime of hate, and it is unacceptable in our Oregon,'' Brown said Saturday. “I implore Oregonians to come together at this time.''

Portland Mayor Ted Wheeler applauded the sacrifices of men who stepped up to protect others.

“These men were all attacked because they did the right thing. Their actions were brave and selfless and should serve as an example and inspiration to us all,'' said Wheeler, who flew back to Portland from a business trip to London upon learning of the tragedy. “They are heroes.''

Praise poured in from across the country for the men who tried to help the young girls, as well as revulsion at Christian's words.

“He was saying that Muslims should die. That they've been killing Christians for years,” Dyjuana Hudson told The Oregonian/OregonLive. Her daughter, Destinee, 16, had gotten on the train downtown heading east with her 17-year-old friend. Destinee is black and her friend is Muslim and was wearing a hijab, a traditional head covering.

The girls tried to distance themselves from the stranger, who boarded near Lloyd Center, but he pressed on, screaming at them as he approached, Dyjuana Hudson said.

“He had been acting up the whole ride, pretty much from the time he got on till 42nd,” Hudson said.

That's when the other passengers stepped in.

“You can't get at them like that — they're little girls,” one of them said, according to Hudson.

He was taken into custody on the north side of Providence Portland Medical Center, on an access road running along Interstate 84, just east of 47th Avenue, at 4:48 p.m., police said. He was booked into the Multnomah County Detention Center at 2:12 a.m. Saturday. He'll be arraigned in Multnomah County Circuit Court on Tuesday.

He has shared anti-Muslim memes, espoused Nazi beliefs and called Oklahoma City bomber Timothy McVeigh a “true patriot” in Facebook postings online. He also was a prominent participant in the April 29 “March for Free Speech” on 82nd Avenue, casting Nazi salutes with a Revolutionary War-era American flag wrapped around him while shouting, “Die Muslims!''

On Facebook, Christian has spoken of his Nazi sympathies and posted a picture of Adolf Hitler in an album he called “Good Stuff.” The Southern Poverty Law Center, which tracks extremist groups, said his posts reflected “an individual all over the political spectrum but indicates that he holds some racist and other extremist beliefs.”

Randy Blazak, who has worked as a Portland State University professor and studied extremism and hate groups, called the violence “a manifestation of the permission that hate speech has been given in the last year. Here's an example where it tips over to something violent.''

Christian has felony robbery, kidnapping and weapon convictions, records show. When he was 20 years old, he was shot in the face by Portland police after he robbed a convenience store.

In October 2011, Christian was convicted of being a felon in possession of a firearm in federal court and sentenced to time served, plus three years of supervised release. He violated the terms of his release several times – in August 2012 for testing positive in an urine test for use of “spice,'' or synthetic marijuana, and failing to attend treatment a month earlier. He agreed to to go to a residential re-entry center, but then violated supervision again by not staying at the re-entry center and was sentenced to another nine months in custody in 2013.

On the train Friday night, the girls who were the target of the racist remarks sprinted from the train as soon as the doors opened at the Hollywood transit station at Northeast 42nd Avenue, about four miles from downtown. They left their purses behind in their desperation to get away.

Others ran after the assailant once he fled from the train at the Hollywood stop.

Larry Blackwood had been on the train on his way home from work when he heard people screaming from a car in front of him and saw a crowd of passengers start charging off the train about 4:30 p.m.

“The screaming – I've never heard that much terror in people's voices before,” said Blackwood, 27, of Milwaukie.

He heard people talking on their phones, describing what the suspect looked like: a man with long hair, no shirt, wearing shorts who had headed to the right as he fled the train. Blackwood said he took off in that direction and he and two other men caught up with the man, who had blood on his body and shorts. The man threatened him and pulled out a knife, he said.

The group directed a police officer toward the suspect, who was near Providence Portland Medical Center, he said. The officer told Christian to get down, Blackwood said, and the man urged police to shoot him.

Christian still held a knife in his hand and said he was going to come at an officer, prompting the officer to get behind a car door, Blackwood said.

The suspect “was asking for it,” Blackwood said. “He was literally asking them to shoot him.”

The man repeated himself, screaming all sorts of things at officers, Blackwood said.

At least eight officers cornered Christian and took him into custody.

The Council on American-Islamic Relations condemned the killings and immediately called on President Donald Trump to publicly denounce growing bigotry in the wake of the stabbings. Portland's mayor also singled out “our current political climate'' that he said “allows far too much room for those who spread bigotry. Violent words can lead to violent acts.''

The brutal attack came at the start of Ramadan, the Muslim holy month.

Portland Police Chief Mike Marshman sent an email to Muslim community leaders Friday night assuring them that investigators were working on the case and adding, “With Ramadan beginning this evening, please know that the Portland Police Bureau stands by your side and will have extra police patrols for you,'' the chief wrote.

Wajdi Said, of the Muslim Educational Trust, and other Muslim community leaders crowded into a community room at the former Portland police Southeast Precinct on Saturday afternoon.

Wheeler, Brown, Marshman, state and federal prosecutors and police supervisors gave a briefing on how the investigation is being handled, issued pledges that additional police will be riding the city's light-rail and listened to community concerns.

Muslim leaders said they'd like to express their support to the families of the victims, and have raised at least $50,000 toward a $60,000 goal for the victims and their families.

Seemab Hussaini, of the Oregon chapter of the Council on American-Islamic Relations, urged federal prosecutors to pursue hate crime charges against Christian, to send a message that this type of violence won't be tolerated. He said he fears that officials may not pursue such a case, and may simply rely on the capital murder charge.

Oregon's U.S. Attorney Billy J. Williams said federal hate crime and civil rights prosecutors will review the details of the full investigation to determine whether to lodge federal charges against Christian. FBI agents are working closely with Portland police on the case. Williams said hate crime prosecutions remain a priority for the U.S. Department of Justice.

“There's certainly a potential that federal crimes could be added,'' he said. “We will look at all avenues working with our local partners. We just need to let the investigation progress.''