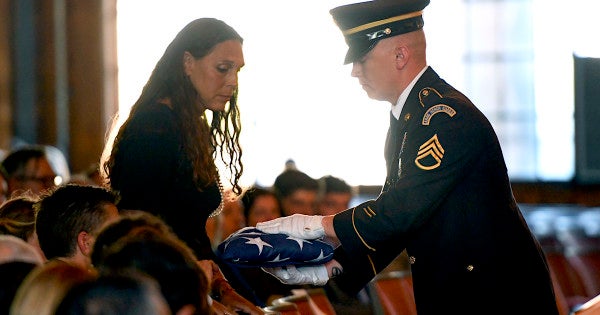 LAKE JUNALUSKA, N.C. — Brilliant sunshine, a gentle breeze, boisterous songbirds, a cavernous and rustic chapel on the edge of an idyllic lake — it was, nearly everyone would have to agree, the perfect setting from which to say goodbye to a young man who will forever be known as a hero.

As more than 1,000 people filed reverentially into Stuart Auditorium on Sunday afternoon, they were greeted by the face of that hero: Riley Howell, who died in the UNC Charlotte shooting just five days earlier after pinning the gunman down and thwarting attempts to kill more of his classmates. (One other student was killed and four more were injured, but police have repeatedly asserted that Howell ensured there wasn't further violence.)

The seven-foot-wide tapestry adorning the stage showed Howell's face — the top of his head covered by that mop of shaggy blonde hair, the bottom half of it overwhelmed by a striking jawline and that infectious grin — underneath the words “What is a hero without love for mankind.”

If that weren't enough to solidify his hero status, an American flag that had been crisply folded with military precision into a triangle rested on a brass stand atop an oak pedestal off to the left side of the stage.

Then Howell's casket arrived, carried in by a group of eight young men and laid to rest before the stage, as the North Carolina band Balsam Range used its strings not to create the bluegrass it's known for, but for an aching rendition of “Amazing Grace.”

As friends and family members shared their stories with the congregation, pretty much everything they said reinforced the theme of his life that has rippled across the state and the country in the wake of the tragedy. That Riley Howell was always there with a kind word or a kind gesture for others. That if you needed him to, he'd go to bat for you, no questions asked.

And that his heart was pure.

“One thing that Riley did that always confused me was leaving his keys in an unlocked car practically anywhere he went,” said his friend Lucas Tate. “For awhile, I didn't understand this, and gave him a hard time for it. But finally, I realized Riley did this because he didn't look for the bad in people — he only saw the good.”

Multiple speakers also mentioned their shared grief for the other victim of the shooting, 19-year-old Ellis Parlier, whose memorial service was to be closed to the public. But the focus here, on this day, at this lakeside retreat a couple of miles from Howell's hometown of Waynesville, was the 21-year-old with the golden hair and the even-more-golden smile.

Howell's three younger siblings each shared brief messages that filled out a striking portrait of him, from 14-year-old Teddy's stories involving Legos and birds and wrestling matches and his brother's deep affection for the outdoors (“My superhero doesn't wear a cape, he wears Tevas”) to his little sister Iris's assertion that “he always said he would beat someone up for me if I ever needed it.”

But perhaps the most emotionally powerful moments came through in thoughts from a family friend: Kevin Westmoreland — the father of Howell's girlfriend of almost 5-1/2 years, Lauren Westmoreland — who at one point needed nearly 30 seconds to compose himself before he continued reading the words he had prepared.

The only sound that could be heard inside the building during this long pause was his shaky breath, as he exhaled and unsuccessfully fought back tears. To the far left of the stage, a police officer who had been stoically holding his post by an exit door dabbed at his eyes twice.

When he finally got his breath, he said, “When your daughter falls in love with someone, and they fall in love back, it damn well better be someone that loves her for exactly who she is. Who makes her laugh. And who takes care of her in all ways. We got that in Riley.”

He suggested that maybe Howell's purpose in life was to show the world that selflessness is not gone, and also quoted “Star Wars” hero Obi-Wan Kenobi's famous last words to Darth Vader (fitting, as Howell was a huge fan of the films): “'If you strike me down, then I shall become more powerful than you can possibly imagine.' And it looks like that's coming true.”

Finally, Westmoreland recounted a story he was told by Howell's parents, about how he learned sign language at the age of 3 so he could converse with his Uncle Matt, who is deaf. Then he showed everyone the simple sign for the word “love,” and asked everyone to make the sign. Nearly 2,000 people complied.And to close the service, Howell got the ultimate hero's treatment: A uniformed member of the military marched slowly on stage and saluted the folded flag as three deafening shots were fired just outside the open doors to the left, the sounds crackling through the room and ringing out across the lake.

“Taps” played, six others in uniform joined their fellow serviceman onstage to unfurl and then refold the flag — even tighter this time — and then a single one marched slowly off the stage and brought it to Howell's parents.

Though again, not a sound could be heard in the room except for the hum of the ventilation system, it was impossible to make out even a whisper as the man in uniform addressed Thomas Howell and Natalie Henry-Howell.

But it's safe to say that it went something like this: Your son is a hero.

Then Balsam Ridge, the bluegrass band, returned to the stage, sticking with the Christian theme but this time going back to bluegrass. Going with something upbeat. Something hopeful.

Let me live blessed, Lord, in the light of thy word,

Let my life be a light on a hill,

Help me do some good deed while I live.