Twenty-five-thousand personnel from 25 countries around the Pacific are taking part in the 26th iteration of the U.S.-led Rim of... 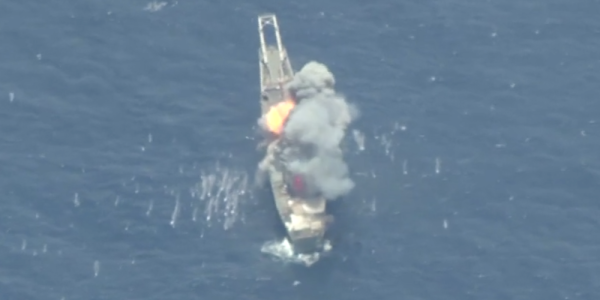 Twenty-five-thousand personnel from 25 countries around the Pacific are taking part in the 26th iteration of the U.S.-led Rim of the Pacific exercise, which runs from June 27 to August 2.

The event is meant to strengthen partnerships and security ties around the world's largest ocean.

On July 12, live fire from aircraft, a submarine, and land-based missiles rained down on the former USS Racine, a 522-foot-long, 5,100-ton landing ship tank that was decommissioned a quarter-century ago.

Sinking exercises are not new to RIMPAC, but the latest version of the drill comes amid growing tension with China in the region, and several first-time features of the exercise underscore how the U.S. and its allies are preparing for new and emerging threats in the Pacific.

Racine was one of two ships hauled to a target area 63 miles north of the Hawaiian island of Kauai by the Military Sealift Command tug Sioux. Preparations began months ago, when Navy personnel started scouting the decommissioned ship to remove fuel, chemicals, and other contaminants. The ship has been in port for close to three decades, which complicated the tow.

The Sioux will also tow the decommissioned guided-missile frigate McClusky to a target area for a sinking exercise before it ends on July 17.

“Ex-Racine was not like some of our regular tows, where we are moving an active ship from one place to another,” said Capt. Harry Sprague, the Sioux's civil-service master. “With this one, our concern was what would happen once we started to move it; was it going to be seaworthy? Would it take on too much water? Would we be able to deliver it to a spot in the ocean where it may or may not sink when the time came?”

Australian, Japanese, and U.S. personnel took part in the July 12 sink-ex. At Pacific Missile Range Facility Barking Sands in Hawaii, Japanese Ground Self-Defense personnel fired a surface-to-ship missile, and U.S. soldiers fired a Naval Strike Missile and missiles from a High Mobility Artillery Rocket System, both of which were truck-mounted.

The U.S. and partner forces have put new emphasis on ground-based missiles as the ocean and littoral areas have become more contested. “Countries like China, Iran, and Russia are challenging our ability to project power ashore, from the sea, through ever-more sophisticated anti-ship missiles,” Adm. Harry Harris, then-head of U.S. Pacific Command, said in 2016.

Mobile, ground-based, long-range missiles are seen as another option — alongside Navy and Air Force assets — to target enemy ships when anti-ship missiles make it harder to operate in contested waters. Such coordination reflects the Pentagon's ambitions for a multi-domain approach to battle, drawing on cooperation and information-sharing between militaries and service branches.

Ground-based missiles can be reloaded, and their mobility makes them harder to detect and destroy. Such forces are “like an unsinkable aircraft carrier,” Brown told The Star-Advertiser.

During the July 12 sinking exercise, a Japanese P-3 Orion maritime patrol aircraft was on the scene to acquire the target, but poor weather prevented it from doing so. Instead, a Gray Eagle drone, working with a U.S. Army Apache helicopter, tracked down the target.

The Apache relayed target information from the drone to Army personnel on the ground, who passed the details along to the Japanese and U.S. missile crews.

Japanese personnel fired four Type 12 missiles at the Racine, all of which hit the target, the Navy said. The Japanese missiles were also fired alongside missiles from a U.S. High Mobility Artillery Rocket System. The U.S. Army also fired the Naval Strike Missile — likely the first time the service has done so, Col. Christopher Wendland, the head of the multi-domain task force, told The Star-Advertiser.

Damage to the forward section of the USS Racine.Screenshot U.S. Navy video

Sinking exercises “are an important way for us to test our weapons and weapons systems” in the most realistic way possible, said Canadian navy Rear Adm. Bob Auchterlonie, deputy chief of the RIMPAC Combined Task Force. A Royal Australian Air Force P-8A Poseidon maritime patrol aircraft — taking part for the first time — fired a Harpoon anti-missile at the Racine during the exercise.

U.S. Navy fast-attack sub USS Olympia also fired a Harpoon missile, in addition to a Mark 48 torpedo. The potency of torpedoes against a ship means they are typically used last during sinking exercises. The Racine still took an hour to give in, however, slipping beneath the waves into 15,000 feet of water around 8 p.m. on July 12.

The exercise “demonstrated the lethality and adaptability of our joint forces,” U.S.j Indo-Pacific Command head Adm. Phil Davidson said. “As naval forces drive our enemies into the littorals, army forces can strike them. Conversely, when the army drives our enemies out to sea naval firepower can do the same.”