When the cup of clear liquid and ice, thrown by the passenger in the minivan next to him, hit off... 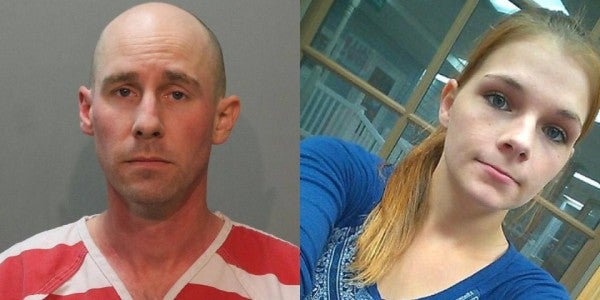 When the cup of clear liquid and ice, thrown by the passenger in the minivan next to him, hit off his Toyota Sequoia SUV, Christopher Taylor said he reverted to his basic Army training – “reacting to contact” – and grabbed his loaded handgun stored between the driver's seat and front console.

It was instantaneous, and he shot without looking into the minivan driven by Whitney Gray, Taylor told a Rapid City, South Dakota, police detective.

“I don't know why, but it was a negligent discharge,” Taylor said in an October 2016 interview, after he had been arrested just outside of Rapid City two days after the shooting. “I didn't want it to happen, I couldn't believe it had happened, I panicked, I just hit the gas. I didn't know what the hell to do; I was scared.”

Taylor, 40, is on trial, charged with second-degree murder in the shooting death of the 22-year-old Gray near the intersection of Sterling and Winner roads in Independence, Missouri. The jury viewed the video of his interview with Rapid City police as part of the first day of testimony Tuesday at the Eastern Jackson County Courthouse in Independence.

Gray, with her 16-year-old niece in the passenger seat and her two young sons in the back, was hit in the upper chest by Taylor's lone shot that broke through the windshield. She died at the scene.

The thrown drink and fatal shot were the culmination of what multiple witnesses testified saw as a possible road rage incident fueled by Taylor following right behind Gray's vehicle.

“I kept waiting for them to speed up and they didn't,” Taylor said in the video, recalling them driving north on Sterling. “I went around them.”

At the stoplight at Winner Road, with Gray in the left turn lane and Taylor in the left lane, some verbal sparring began.

“She said 'My kids are in the car,'” Taylor said. I said “at least drive the speed limit.”

“There was a lot of yelling back and forth,” Fisk said, referring to the three of them. When she and Gray yelled about children being in the car, she said, Taylor replied, “I don't give a (bleep).”

Fisk said she and Gray noticed Taylor's vehicle following closely about a block later on Sterling after they had bought groceries at Sterling and 23rd Street. Fisk said Gray had mentioned to her about throwing the drink, then changed her mind, and Fisk said she got mad and decided to throw it anyway.

Spencer Warren, who had been driving behind on his motorcycle, said the vehicles were “so close you couldn't see any space between them” and he backed off. Both vehicles appeared to be driving aggressively, and Gray's minivan braked several times in the middle of the road, but Taylor caused more alarm.

“I stayed back because of the what the white vehicle (the SUV) was doing,” he said.

Warren and other witnesses confirmed the shouting exchange that night, even if they couldn't decipher what was said and who said it, saw the cup thrown and then heard and/or saw the single shot no more than a few seconds later. A couple witnesses said they thought Taylor's SUV had moved forward a bit before the shot, and another noted the SUV could have been ahead already because the turn lane is set back several feet.

Police crime scene technician Kyla Walje said the bullet fired appeared to be a hollow-point round, which will mushroom out after impact. The bullet hit the windshield in front of the passenger seat at a trajectory toward the driver's seat, she said.

'Freaked out and panicked'

In the video, Taylor is fighting back tears in saying that he “didn't pull the trigger on purpose” and that it was like basic military training and like police. “They react to contact – a trained response like muscle memory.”

Taylor recalled that when he got home and then heard on the radio of a fatal shooting, he “freaked out and panicked. I started packing up my stuff.”

According to court documents, that stuff included clothing, camping gear, a rifle, ammunition, gold and silver pieces and an acoustic guitar.

He started driving away from Independence, ignored later calls from his concerned parents and took the battery out of his phone. Several hundred miles later, having thrown the handgun in the Missouri River in South Dakota, he said, Taylor stopped at a hotel just east of Rapid City.

Taylor told police he had planned to turn around and go back the next day.

“I've never even been in a fight; everything's good in my life,” he said through tears, adding that he felt sorry “for the family of the girl that I killed. It wasn't justified, what I did. All I could do was turn myself in. There's no way you could run from that (stuff).”

After Independence Police determined Taylor as a likely suspect and learned his SUV had a tracking device courtesy of the Lee's Summit dealership that sold him the vehicle, they notified law enforcement in Rapid City, who then went to the hotel.

Rapid City Police Detective Trevor Tollman, who interviewed Taylor in the video, testified that officers had been wary of possible guns in the guitar case, so they “created a ruse to get him out of the room.”

That meant hitting Taylor's SUV with a police vehicle, and when he didn't come out of his hotel room, they used the front office desk to call about the parking lot “accident,” which convinced Taylor to emerge.

On the stand, Tollman repeated what he had said on video – that Taylor appeared genuinely remorseful and that he wished more suspects would be as honest as Taylor appeared to be.

After the fatal shot, Gray's minivan started to swerve across the southbound lanes of Sterling. Fisk testified that after seeing Gray had been shot, she was able to steer the vehicle as it coasted back to the right and across railroad tracks before stopping it on a curb partially off the street.

Two of the gunshot witnesses described rushing to the minivan as Gray stumbled out of the minivan.

“I laid her down on the street, removed my T-shirt and applied pressure to the bullet wound,” Michael Stark said. “It didn't do any good.”

Testimony continues today, and the case could go to the jury of 10 women and four men before the end of the day.