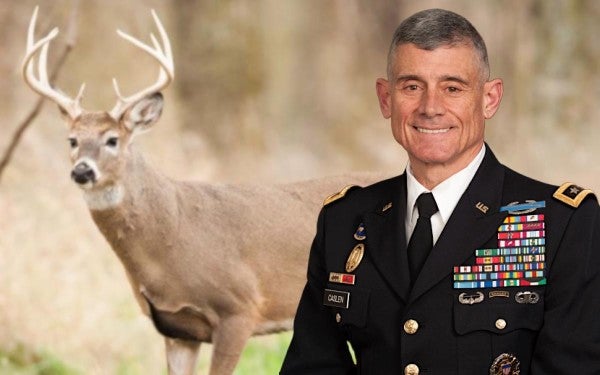 One day, while deer hunting, Caslen, a three-star general and former Superintendent of U.S. Military Academy at West Point, wrestled a deer into a lake and drowned it with his bare hands.

The story of how Caslen killed a deer with his bare hands has been a legend in the Army for years, though it is unclear when exactly it happened.

“It's only a matter of time till someone at UofSC digs up the whole deer drowning story,” Caslen's son Nick wrote in an open letter posted to Twitter. “Reach out to any West Point grad since 1981 and they'll tell you the story.”

Caslen, armed with a .30-30 rifle, was deer hunting near Lake Frederick in New York State, just about 10 miles from West Point when he spotted a buck about 100 yards away, he told The Leadership Podcast for an April 2019 episode.

The deer was 100 yards out, well in range of his iron-sighted .30-30 rifle. The deer had its back to Caslen, and all he could see was the deer's horns and its rear end.

Then something strange happened. Caslen — who served as a special forces soldier in the Army Rangers — missed.

“It's because I was a bad shot,” Caslen told The Leadership Podcast.

The buck didn't run, giving Caslen a chance to fire again. This time, the bullet found its mark.

“I knew I hit him because he jumped straight up,” Caslen said.

The deer ran and Caslen began tracking it, taking the high ground, and he noticed the deer was sprinting for the lake.

“I was ready to shoot him, but unfortunately, on the other side of the lake there was a guy on a tractor mowing the grass out there,” Caslen said on the podcast. “He was down-range of where I was going to shoot so I didn't shoot.”

The deer then jumped in the lake and tried to swim across, but stopped halfway and returned to the shore. Caslen resumed tracking the deer and got within 10 feet of it, where it was lying on the river bank. Caslen took another shot and missed.

Then, “he came flying out of the lake right at me, similar to a bull in a bull run,” Caslen said on the podcast. “As he came flying at me, I couldn't even shoot or anything. I just dropped my gun. I kind of stepped to the side like a bullfighter and I grabbed him around his neck. I had him in a choke hold, so I wrestled him to the ground.”

Caslen dragged the bucking deer to the nearby Lake Frederick and wrestled with it, jamming its head into the water but it kept fighting. After bucking Caslen three or four times, the deer finally stopped fighting.

When a host from the Leadership Podcast asked Caslen what lesson he learned from the experience, he said it was being persistent and persevering even in the “cruicible of combat.”

“This combat was wrestling a deer, but it could have been anything,” Caslen said.

Caslen's first day as president of the University of South Carolina will be Aug. 1.