“We wore masks there but nothing was open,” Gill said of life in Kabul. “You come home and everything is open but masks are worn.” 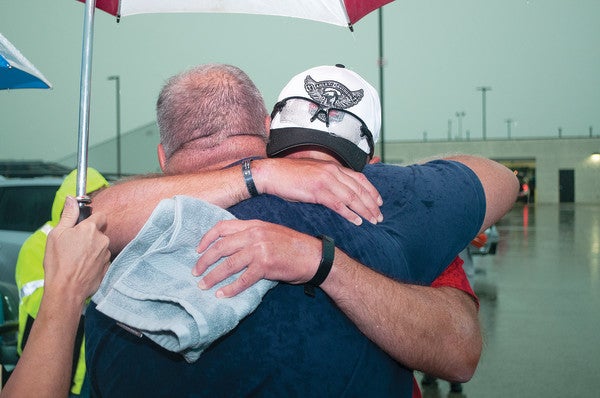 For the past 11 months — since well before the COVID-19 pandemic — Kabul, Afghanistan, has been home for Army Sgt. Maj. Ron Gill of Franklin — who was serving his fifth tour of duty away from his fiancee, children, family and friends.

He returned to a pandemic-affected nation in which face masks and social distancing are part of daily life.

As he was traveling home from Texas, Gill even was told he couldn’t use a public restroom, another pandemic precaution.

“It shook me,” said Gill, who has been active in the military for 34 years.

Coming home amid the pandemic has made the transition harder than normal, he said.

“The transition back to the states has been the most difficult one,” he said.

“We wore masks there but nothing was open,” Gill said of life in Kabul. “You come home and everything is open but masks are worn.”

Soldiers are trained to read a person’s eyes, facial expressions and body language to gauge threats.

“You take one of those elements away and you feel vulnerable,” he said. “It’s very difficult for me. Anxiety this time has been difficult.”

Related: The first US service member to test positive for COVID-19 has recovered

Gill was supposed to be home the week of June 20 but was delayed by the coronavirus.

Planning his return was a challenge but Gill’s fiancee, Lindsey Greathouse, stayed flexible.

“We had been talking back and forth,” Gill said.

After returning to the U.S., Gill was sent to Texas for quarantine for 14 days and anxiously waited his release orders so he could truly go home.

Gill received permission July 14 to go home and, on July 19, Greathouse was on a plane to Texas to meet her fiance.

“I had those whirlwind of emotions during the flight,” she said. “When we landed I basically ran off the plane. My whole mind was set on getting to him.”

What she didn’t realize was that he was surprising her at the rental car pick-up.

Not expecting Gill, who was sporting a new hat and a mask, Greathouse looked right past him but recognized a friend who was recording her.

“I looked at him and kept going,” she said of Gill.

What Gill didn’t realize was that Greathouse had an even bigger surprise for him.

As the couple returned to Illinois, they were traveling north into Springfield when Gill was welcomed at a rest area near Raymond by the Patriot Riders, Combat Veteran Motorcycle Association and Illinois State Police — a greeting planned by Greathouse and Gill’s friends and family.

“They gave me a salute,” Gill said. “I was shocked. It was very emotional.”

Gill then was escorted to Abraham Lincoln Capital Airport in Springfield, where he was able to see family and friends.

“I love my fiancee, my friends, but all I wanted to do was get to my kids and hold them,” Gill said. “After I see them I will hug and shake hands with anyone.”

Still on active duty in the Army Reserve, Gill’s new assignment will allow him to stay home in Franklin for at least three years, he said. He plans to take advantage of it to get in some time riding his Harley-Davidson.

“I missed riding every single day,” he said.

After 34 years and despite recent upheaval across the nation, Gill’s reasons for being in the military still hold true, he said.

“Being in the military allows me to defend others,” he said. “It’s simple. I defend the ability to help others that can’t defend themselves. I took an oath to defend the (U.S.) flag wherever that flag may fly, here or on Afghan soil … but people need to realize, we’re in a 20-year war and the war is still going on.”