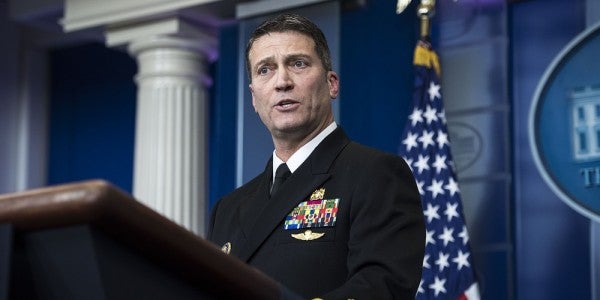 Some of those allegations include claims of excessive drinking at work, creating a hostile work environment, and improperly dispensing medication. The claims come from “current or former White House medical staff,” according to a CBS News report published Monday night.

Business Insider has not independently verified the claims. Neither the White House nor the Veterans Affairs department immediately responded to requests for comment.

Related: The Prospective VA Chief Has An Extremely Ballsy Nickname »

“I can tell you we're vetting out Jackson,” Democratic Sen. Jon Tester of Montana told The Washington Post. “I can't get into specifics, but we're doing our job to make sure he's fit for the job.”

Jackson, who was originally scheduled for a Wednesday hearing in front of the Senate Committee on Veterans' Affairs, has already been under fire from some lawmakers who expressed doubt over the White House physician's ability to lead the nation's second-largest agency.

Jackson, who served as the White House physician under George W. Bush, Barack Obama, and now Trump, was thrust into the spotlight after performing Trump's first physical as president, and later delivering an effusive report on Trump's health.

But despite being well-perceived in the White House, questions over his lack of sufficient management experience have clouded Jackson's nomination, which came shortly after the controversy surrounding the ouster of former VA secretary David Shulkin.

Shulkin was removed from his post in March after a series of scandals and rumors of infighting at the VA. He was the only Cabinet member unanimously confirmed by Congress.

It remains unclear whether Jackson's confirmation hearing will be rescheduled or scuttled completely, according to The Post.

“There's a need for very exacting and close scrutiny and vetting,” Democratic Sen. Richard Blumenthal of Connecticut said to The Post. “And some questions that need to be answered. I'm not going to comment on any of the specifics, except to say we're going to be doing very close and careful scrutiny.”