The Woman Who Helped Inspire ‘Rosie The Riveter’ Has Died

A woman credited with inspiring the “Rosie the Riveter” poster of World War II with its gutsy slogan of “We... 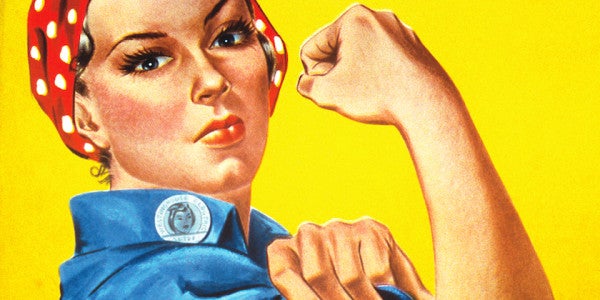 A woman credited with inspiring the “Rosie the Riveter” poster of World War II with its gutsy slogan of “We Can Do It!” that went on to represent female empowerment decades later, has died.

Naomi Parker Fraley died in Washington on Saturday, the same day that hundreds of thousands of women around the world took to the streets for the annual Women's March.

She was 96, according to the New York Times.

Fraley was a 20-year-old civilian working at the former Alameda Naval Air Station shortly after the Japanese attack on Pearl Harbor when a news photographer snapped a photo of her wearing coveralls and a polka dot bandana, hunched over a lathe.

The aim was to highlight the strict dress code that the base commander had put down for women doing industrial jobs to boost the war effort: Slacks and turbans were mandatory. No sandals or open-toed shoes. Jewelry, including rings, was out.

The photo appeared in an Oakland newspaper with a caption that said the clothing policy “hasn't made Miss Naomi Parker any less attractive.” Newspapers across the country also published it.

Fraley saved the newspaper clipping among her family papers, and mostly forgot about it in the years after the war, she said in an interview with the Bay Area News Group in 2016.

Then in 2009, she and her sister visited the Rosie the Riveter/World War II Home Front National Historical Park in Richmond for a “Rosie” reunion and saw the photo on display.

A “We Can Do It!” poster for Westinghouse, closely associated with Rosie the RiveterNational Museum of American History/Wikimedia Commons

Accompanying information, however, identified another woman as the individual in the photo.

“I was amazed,” Fraley said. “I couldn't believe it. There was another person's name under my identity. But I knew it was actually me in the photo.”

Fraley and her family launched a campaign to prove she was the woman who inspired artist J. Howard Miller to paint the iconic image of the woman flexing her bicep.

(Miller created the poster for Westinghouse Electric to inspire the company's workers. During the war, “Rosie the Riveter” was more associated with a hit song by the same name and a painting by Norman Rockwell of a brawny homefront worker on lunch break. Only in the early 1980s did Miller's poster emerge in popular culture as an image of female empowerment — and since then it can be found on T-shirts, coffee mugs and refrigerator magnets).

Among those who backed Fraley's claim as being the poster's likely inspiration was James J. Kimble, an associate professor of communication and the arts at Seton Hall University in New Jersey, who spent six years researching the image.

Kimble was able to locate a copy of the original newspaper photo with the photographer's information on the back, including the date March 24, 1942, the location, Alameda, and the caption, “Pretty Naomi Parker looks like she might catch her nose in the turret lathe she is operating,” according to the New York Times.

While the discovery helped cement Fraley's claim, other researchers have said it remains impossible to know whether the artist ever saw the photo, and say that the woman in Miller's painting may have been a composite.

A representative of the National Park Service, which runs the Rosie the Riveter museum in Richmond, said in an email to the Bay Area News Group in 2016 that it does not promote the identity of any particular individual as the inspiration for the poster.

The New York Times reported that Fraley, who worked as a waitress after the war, died at an assisted living facility.