The British are coming. 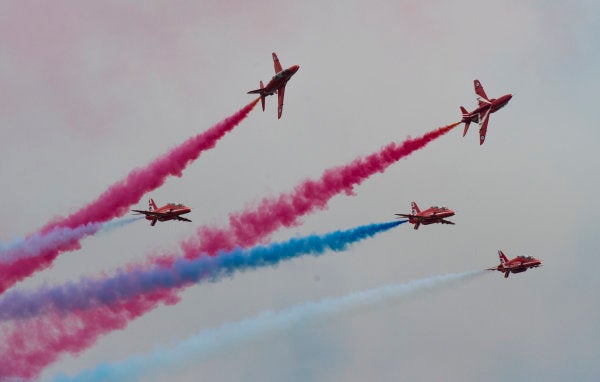 In their first visit to the United States since 2008, the Royal Air Force “Red Arrows” will perform an aerial demonstration next week over the Hudson River, according to an Air Force news release. F-35 Joint Strike Fighters, the Air Force Thunderbirds and Navy Blue Angels demonstration teams will also be part of the show.

The demos along the Manhattan skyline will feature a nine-ship Red Arrow formation; two F-35A Lightning II stealth aircraft; six F-16 Fighting Falcons from the Thunderbirds, and six F/A-18 Hornets from the Blue Angels, according to the release.

Onlookers should gaze upward at approximately 9:30 a.m. on Aug. 22, according to the announcement.

“We've never done a Thunderbirds, Blue Angels, Red Arrows flight over the Hudson before,” Maj. Ray Geoffroy, spokesman for the Air Force demo team, based at Nellis Air Force Base, Nevada, told Military.com on Friday. “Plus, we'll have two F-35s in the mix. It should be an amazing sight.”

Geoffroy said that each team will fly along the river in sequence.

“All aircraft will follow the Hudson River down to Liberty Island, then proceed back up the river,” the release states. “The Thunderbirds will return to Rochester International Airport, while the remaining aircraft will recover at Stewart Airport” northwest of the city.

The teams are in the New York area for air shows happening Aug. 21-25.