In His Run For Congress, This Iraq War Vet Isn’t Running From PTSD 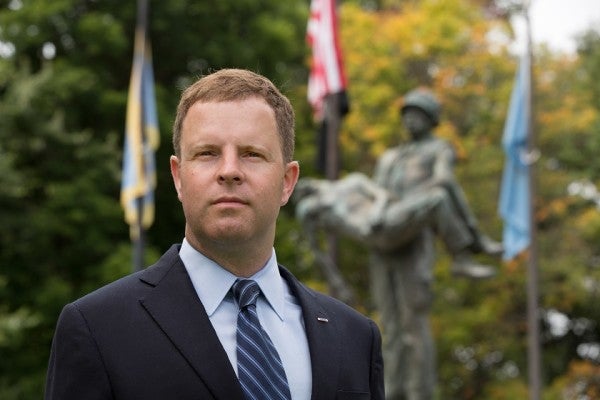 On May 12, 2006, Lance Cpl. Sean Barney was serving in Fallujah, Iraq, as a Marine infantryman when he was struck in the neck by a sniper’s bullet. Miraculously he survived, in large part due to the incredible efforts of his fellow Marines and the unit’s Navy corpsman. Ten years to the day, Barney took time to thank the men who saved his life in a video commemorating his “alive day.”

In the video, Barney, now a Democratic congressional candidate for Delaware, did something few in politics do: He spoke candidly and openly about his experience with post-traumatic stress disorder.

In an interview with Task & Purpose, Barney talked about his military service, his decision to discuss his treatment for and recovery from PTSD, the role his military service will play if elected to Congress, and the importance of a shared identity among veterans and public servants alike.

I read in Politico about your recent announcement and your disclosure of your dealings with PTSD. Can you tell me a bit about your decision to discuss your struggles with PTSD publicly?

I’ve been reaching out to the military community and I’ve had the opportunity to connect with people who are very active in this area and in making sure veterans are getting the care they need. They’ve made the point to me that my story is one that could be helpful in encouraging people to come forward to receive treatments. It’s important for people who are struggling with PTSD know that there is another side of the mountain, an end to the tunnel, that this is a treatable condition and that people can go on to do great things even if they’re at a dark place for a period of time. That encouraged me to think about it.

If sharing my story can result in even a single veteran or non-veteran who’s struggling with issues, coming forward and reaching out to get the help that they need, then it will be worth it.

In your opinion, how do we as veterans, and you as a veteran and a leader, put an end to the stigma associated with PTSD and other mental health issues?

I think we have to address each other as veterans. I think this is part of the challenge with the military as a whole, we are trained, and well trained, to deal with trauma and keep moving forward … but I think the military has realized for some time now that those same qualities that make us so successful on the battlefield can be an obstacle to receiving care when we’re at home because we're reluctant to admit we’re struggling. We’re reluctant to seek help and we very much are reluctant to deal particularly with people who we think don’t understand where we’re coming from.

As veterans and as members of the military community we need to begin to change the culture to make it clear that you’re no less of a warrior because you need to seek help.

I think as a broader society we need to challenge the stigma that stands in the way of those who do seek treatment, achieving their potential and having the opportunities that they should. I think another fear that many veterans and non-veterans who struggle with these issues have is that if they reveal this they’ll be less likely to be promoted in their career, or to get the job they were hoping for in the first place, and in that regard we need to deal with the stigma with respect to the broader public and make it clear that people who are struggling with PTSD, especially those that are receiving the treatment they need, can be very high functioning, tremendously valuable employees, and there's no reason they shouldn’t be employed, promoted, and really seized upon as tremendous assets to their organization.

Do you feel like the Department of Veterans Affairs and the Veterans Health Administration are doing enough to treat PTSD?

I would say that I was satisfied with the treatment I received. As a broad matter across, whether it’s physical treatment of physical wounds or invisible wounds of war, the VA often provides excellent care. Access to care, at least in my state Delaware, and in a lot of places elsewhere in the reports that we’ve seen, access to care has been the issue, where we’ve had scandals with records being falsified to hide the actual wait times veterans are encountering. That resonates with my experiences.

What advice would you have for your fellow veterans who may be struggling with mental health issues?

Your fellow veterans want to help and there are resources with the VA and the veterans crisis line and elsewhere where the resources there can provide help. So please, reach out for help.

I know you mentioned that if you need help and assistance, you should reach out to veterans and peers so you don’t go at it alone, but moving away from mental health, how can veterans build their own support group and a sense of community to aid with transition, or just to have a shared identity as veterans?

It’s a very good question and one that I think the current post-9/11 generation of veterans need to work on. The prior generations of course were very connected to some of our veterans organizations that are very prominent and continue to be very prominent and I’d say there was much more of a culture of continuing and being a part of those organizations in previous generations, than among the post-9/11 generation of veterans.

But we need to make sure whether it’s replicating what previous generations of veterans did precisely that we are finding ways that we’re connecting and staying in touch with people.

More Veterans Will Mean A Better And More Diverse Congress »

If elected, what role would your military background and perspective play?

I think it’s important on a number of fronts.

I think veterans play an important role in keeping these issues front and center. Our wars are no longer on the front pages, they’re fading from the front pages and as that happens, there’s a danger particularly in an era where so few people served that veterans issues also will fade from prominence and from the public agenda.

I think the more veterans we have in Congress, these are issues that will never go away in terms of our heart and our concerns and we can play a role in keeping them front and center as they need to be, because wars have long tails to them. … The issues that come out of the post-9/11 wars will be with us for decades to come.

To go back to the first point, on the back end, to make sure that when our veterans return home that they receive the care and the opportunities that they deserve.

And how can veterans share those experiences with those who have never served to make them better understand?

I think it’s part of the importance of veterans stepping forward and continuing to serve at home. To go back to your prior question, I think having veterans in Congress and having them in public life helps to inform the public discourse in a way that bridges the civil-military divide. But it doesn’t just have to be in politics.

First of all, I’m a personal believer in the notion that it’s important for veterans, in whatever way it makes sense for them, to continue serving. Because that’s an important part of our training in that we come to understand our self worth in terms of contribution that we make to the whole. That’s the transformation that we go through in boot camp and the culture that’s so important to our battlefield success … it’s very important that we find that sense of mission or sense of connection to something other than ourselves.

I think beyond that, for individual veterans it doesn’t have to be public life, but being active in your community and being willing to step forward and tell your story of public service and being involved and engaged in your community is another way we can bridge the civil-military divide.

I think it’s no coincidence that when we’ve had fewer and fewer veterans in Congress we’ve seen a lot of the present dysfunction we see with Congress arise.

When you’ve had more veterans in Congress, you’ve had people that were used to the practice of putting country first. Congress is always going to have its disagreements and there's going to be different sides of the debates, but the question is whether at the end of the day they find a way to find common ground and move the country forward. I think it’s not coincidental that when you have more veterans in Congress, that happens more often, because that’s part of who we are.

When I was in the Marine Corps, nobody asked us if we were Republicans or Democrats, we were expected to work together to perform a mission for the country and I think if we had more of that in Congress we’d have a more functionable Congress and a more successful country.

Right, right. I do really believe that’s a large part of what’s missing in Congress right now. You get elected from different districts, you get elected from different parties, but ultimately you get elected to a position that is and should be a point of commonality: You are all members of Congress; you are all a part of this body with the same duty, which is to work together for the sake of the country. You need that identity to be overriding at the end of the day and that’s not what’s happening too often.

As Marines, that was the key ingredient to our success. Our identity as Marines, our identity as individuals who have committed together to serve the country, overrode whatever differences we brought that day we stood on those yellow footprints.

On a different note, I just had a funny image of Congress going to boot camp, so thank you for that.

Not a bad idea. That should be televised, it’d be entertaining.