Russia has confirmed that it plans on building a new super aircraft carrier despite cuts in the defense budget. “Yes,... 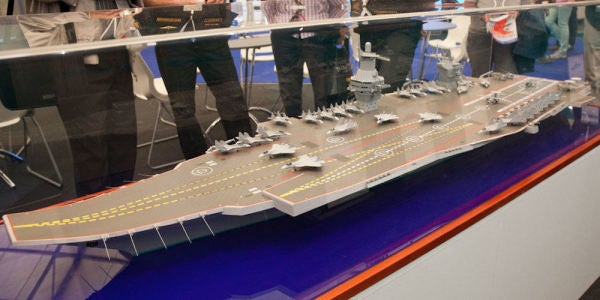 Russia has confirmed that it plans on building a new super aircraft carrier despite cuts in the defense budget.

“Yes, the Navy will build an aircraft carrier, for sure,” Vice Adm. Viktor Bursuk, the deputy commander-in-chief of Russia’s navy, said last month, according to Russian state media. “Different bureaus are hammering out an image of this ship,” he added.

The new aircraft carrier Bursuk was referring to is the so-called Project 23000E Shtorm. The proposed carrier will be powered by two RITM-200 nuclear engines and displace one hundred thousand tons. This is nearly twice the weight of Russia’s only existing aircraft carrier, the Admiral Kuznetsov, which is steam powered and currently being refitted and modernized. The Project 23000E Shtorm ship will also reportedly be able to carry ninety aircraft. Moscow’s current carrier only has about thirty planes on board.

Beyond displacing one hundred thousand tons, the Shtormwill also stretch 330 meters in length and forty meters wide. A crew of four thousand sailors will man the vessel, which is expected to feature MiG-29K fighter jets, a naval version of the T-50 and a slew of different helicopters. According to Global Security, the plan is for the ship to have “two ramps and two electromagnetic catapults to launch aircraft from its deck. To defend itself from aerial attacks, the aircraft carrier has air-defense missile and anti-torpedo defense systems.”

An illustration of the Project 23E000E 'Shtorm' aircraft carrier under development by the Russian Defense MinistryPhoto via GlobalSecurity.org

Although Russian officials claim that a nuclear-powered aircraft carrier has been under consideration since 2007, Russia’s Krylov State Research Center first announced Project 23000E Shtormin 2015. The first reports indicated it would be a conventionally powered vessel. The price tag for the Shtorm carriers has been placed at about $9 billion, although other estimates are much higher. Deputy Defense Minister Yuri Borisov has said that the contract for the ship will be signed around 2025 and the first vessel completed by 2030.

There are good reasons to doubt that Russia will actually build a nuclear-powered aircraft carrier in the foreseeable future. For one thing, it is far from clear that Russia’s shipbuilding industry is up to the challenge. AsIHS Jane’s noted shortly after the Shtorm carrier was announced in 2015, the new vessels “would be a quantum leap in capability and size over the Russian Navy’s single existing carrier, Admiral Kuznetsov.”

Complicating the problems for Moscow is the fact that the Soviet Union’s aircraft carriers were all produced in Ukraine. This fact already doomed an eighty-five-thousand-ton carrier called Ulyanovsk, which was being built at the time the Soviet Union collapsed. The other carrier under construction at that time was sold to China and later commissioned by the People’s Liberation Army Navy under the name Liaoning.

China's first domestically built aircraft carrier, starts to sail during the launching ceremony in Dalian, China on April 26, 2017. The 50,000 tons home-made warship, can hold 36 fighter jetplanes and is expected to join a trial drill.Photo via AP

The new carrier would also feature new capabilities that even the Soviet Union never mastered when it had the Ukrainian shipbuilding yards under its control. Most notably, Soviet carriers never featured nuclear-powered propulsion systems. Russian defense industry sources have told state media that they would gain expertise for this future carrier system by first building a nuclear-powered destroyer. “At first, the nuclear power unit for the future national aircraft carrier will be worked out on the Liderdestroyer,” an unnamed shipbuilding-industry source told TASS in 2015.

But the Lider destroyer program has encountered numerous delays and the first vessel is not slated to be completed until 2025 at the earliest, six years after it was initially expected. Construction on the destroyers is not scheduled to begin until 2019. The two electromagnetic catapults would also be a huge leap from the ski-ramp configurations used on previous Soviet and Russian carriers.

Another factor working against the supercarrier is that Russia is instituting substantial cuts to its military budget. Earlier this year, IHS Jane’s reported that Moscow was slashing its defense spending by 25 percent in 2017, the largest reduction since the early 1990s when the Russian Federation was in disarray. Although some experts disputed the budget cuts were actually this large, the reality is that Russia cannot sustain profligate military spending of recent years now that oil prices are so low.

A model of the Project 23E000E 'Shtorm' aircraft carrier under development by the Russian Defense MinistryPhoto via GlobalSecurity.org

When Moscow is forced to make tough choices on what military programs to trim, a supercarrier is likely to be near the top of the list. After all, Russia is traditionally a land power and there is just not a large need for it to maintain a carrier force. This is especially true when you factor in the excessive costs. Even back in 2015, well before the defense cuts were announced, one Moscow-based analyst was warning, “There is the problem that any attempt to build such a vessel would require an expansion of the shipyard capacity in Russia that would ‘break the bank’ .”

These costs go beyond simply building the ship, as a large number of other ships are needed to defend and supply the carrier while it is operating. This would further deplete Russia’s already limited naval capacity. As Franz-Stefan Gady noted, “The Russian Navy also lacks escort ships and support vessels for a carrier strike group not to mention carrier-based long-range strike and electronic warfare aircraft.”

And it is unclear exactly which missions such a large supercarrier would be needed for. Moscow’s need to project power is much more restricted than Washington’s, and its limited funds would probably be better used building long-range aircraft and missiles to perform the missions dictated by Russia’s national interest. Altogether, the prospect of a Russian supercarrier seems like a pipe dream.