Russia and China are drawing closer together as the two great powers solidify their entente to challenge the United States and its... 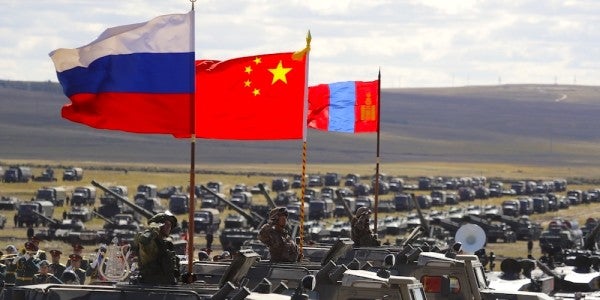 Russia and China are drawing closer together as the two great powers solidify their entente to challenge the United States and its liberal hegemony.

Not only do Russian president Vladimir Putin and Chinese president Xi Jinping seem to have established a good personal rapport, the Russian military and the People’s Liberation Army are set to conduct massive wargames such as Vostok-2018 exercises on a regular basis in the future. Russian defense minister Gen. Sergei Shoigu said as much when he hosted his Chinese counterpart Gen. Wei Fenghe during a visit to the Tsugol training ground as a part of Vostok-2018 . “We have agreed to hold such exercises on a regular basis,” Shoigu said in a statement.

Wei, for his part, also stressed the importance of Sino-Russian “cooperation on operational and strategic levels.” The Chinese military and political leadership in Beijing consider such cooperation with the Russians to be particularly important, according to the Russian Defense Ministry statement.

Indeed, both the Russian and Chinese leadership stressed cooperation between the two great powers during Xi’s visit to Vladivostok, Russia, on September 11. “Today was President Xi’s working visit to Russia,” Putin said. “It included talks during which we discussed the most urgent bilateral and international matters, and outlined further plans to promote the comprehensive partnership and strategic cooperation between Russia and China.”

Xi, for his part, noted that he had met with his “close friend” Putin three times within the past four months, which demonstrates the “special character” of Sino-Russian relations.

“The President and I agree that since the beginning of this year Russian-Chinese relations have been showing dynamic growth, have entered a new era of rapid development and are reaching a higher level,” Xi said. “The parties reaffirmed firm mutual support in the choice of the development path that agrees with the national features of both countries as well as our security and development interests.”

Russian, Chinese and Mongolian national flags set on armored vehicles develop in the wind during a military exercises on training ground “Tsugol”, about 250 kilometers (156 miles ) south-east of the city of Chita during the military exercises Vostok 2018 in Eastern Siberia, Russia, Thursday, Sept. 13, 2018.Associated Press/Sergei Grits

Xi further noted that Russia and China share a common worldview and share the same common interests. Xi also touted the importance of the Sino-Russian entente to global security—at least from the Chinese point of view.

“As permanent members of the UN Security Council and leading countries in the developing markets, China and Russia bear enormous responsibility for the maintenance of peace and stability together with the promotion of the development and prosperity all over the world,” Xi said. “We have similar or identical positions on international matters, broad common interests and firm foundations for cooperation. China-Russia cooperation in maintaining equality, justice, peace, and stability throughout the entire world is gaining ever more importance against a backdrop of growing instability and unpredictability on a global scale.”

Putin also urged the Russian “regions” to further expand their ties to their Chinese counterparts, which he views as key to the Sino-Russian entente. “We hope that your cooperation strengthens ties between our countries and helps Russia and China step up their relations,” Putin said. “It is our belief that our relations are essential and critical for our countries, as well as for the world in general. These are global, strategic relations that are gaining momentum. Your efforts will be decisive in ensuring this progress.”

While Russia and China have not always been on the best of terms, especially after Sino-Soviet in the 1960s, Moscow and Beijing have found common ground in recent years even if the relationship remains transactional in many ways. Even American experts on Russia are starting to accept the possibility of a genuine Beijing-Moscow entente directed against the United States.

“I think a strategic partnership is slowly in the offing, but is encumbered by the two sides' self-interest and transactional impulses,” as Center for Naval Analyses analyst Michael Kofman told The National Interest earlier this year. “As such, the catalyst will be a third actor, namely the United States, and the extent to which those countries perceive a threat from Washington in common.”

This article originally appeared in The National Interest