Russia showed off its new “Star Wars-like” combat suit on Thursday at a science and technology university in Moscow, state-owned... 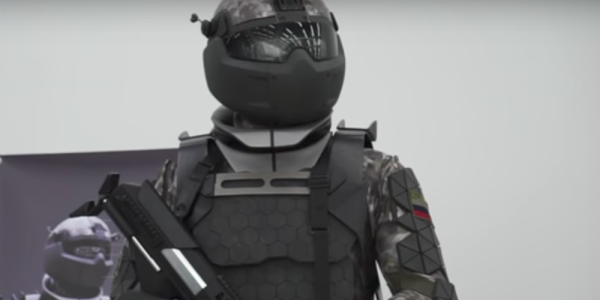 The “next-generation” suit comes with a “powered exoskeleton” that supposedly gives the soldier more strength and stamina, along with “cutting-edge” body armor, and a helmet and visor that shields the soldier's entire face, RT said.

The suit also has a “pop-up display that can be used for tasks like examining a plan of the battlefield,” Andy Lynch, who works for a military company called Odin Systems, told the Daily Mail. There's also a light on the side of the helmet for inspecting maps or weapons.

Russia hopes to produce the suit “within the next couple of years,” Oleg Chikarev, deputy chief of weapons systems at the Central Research Institute for Precision Machine Building, which developed the gear, told the Daily Mail.

It should be noted, however, the video only showed a static display of the suit, and it's still an open question of whether it actually has any of the capabilities that are claimed.

Still, Russia is not the only country developing such technology, Sim Tack, a Stratfor analyst, told Business Insider in an emailed statement.

The U.S. hopes to unveil its own Tactical Light Operator Suit (TALOS), also known as the “Iron Man” suit, in 2018.

Tack said that France is perhaps furthest along in creating its Integrated infantryman equipment and communications system, or FELIN, but it's not as high-tech as the Iron Man suit.

Nevertheless, it's “unclear whether these type of suits will eventually make it to the battlefield,” Tack said.

Some technical problems still persist: for example, the batteries required to power the exoskeletons — many of which have leg braces that evenly distributes weight and allows the soldier to run faster and jump higher — are too bulky because the suits require so much power, Tack said.

But given how much effort countries are putting into developing these suits, “we may well see some type of them reach the battlefield at some point,” Tack said.