Ten years after the two countries fought a short but deeply formative war, Russia is quietly seizing more territory on... 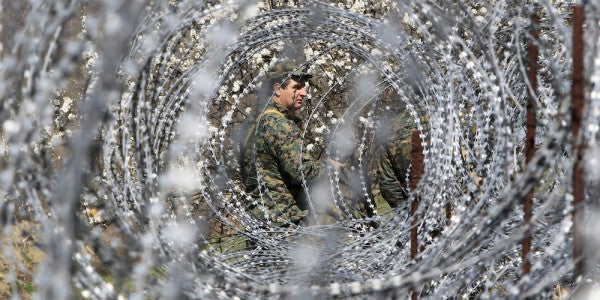 Ten years after the two countries fought a short but deeply formative war, Russia is quietly seizing more territory on a disputed border with Georgia as it warns NATO against admitting the tiny Eurasian nation as a member state.

Despite warnings from Washington and the fact Georgia is a top U.S. ally, Russia and local allies have been swallowing more and more territory in recent years. The Georgian government and international community have continuously decried this ongoing practice as illegal .

The ongoing, incremental seizure of land has had a detrimental impact on many locals, as the Russia-backed “borderization” has split communities and led some Georgians to literally find their homes in Russian-controlled territory overnight, NBC News reports.

Since 2011, there have been at least 54 instances of “borderizaton” on the border separating South Ossetia and Georgia, according to the Heritage Foundation . The “borderization” process “includes constructing illegal fencing and earthen barriers to separate communities and further divide the Georgian population,” the conservative think tank said in a recent report.

It's not clear whether this is being directed by Moscow or the pro-Russian government in South Ossetia, but the Kremlin hasn't done anything to stop it.

Russia has 19 military bases in South Ossetia alone and its activities in the region, on top of its annexation of Crimea from Ukraine in 2014, have continued to raise alarm bells in the West. The Russian military and its allies currently occupy roughly 20 percent of Georgia's internationally recognized territory.

The ongoing dispute over these territories has made the normalization of relations between Georgia and Russia impossible.

It's also a large part of the reason the U.S. has continued to provide Georgia with $100 million in aid every single year, which is also linked to the country's active role in supporting the North Atlantic Treaty Organization (NATO) in Afghanistan as part of the International Security Assistance Force (ISAF).

Georgia has sent more troops to Afghanistan per capita than any other U.S. ally.

With Russia to the north, Turkey to the west, and Iran not far to the south, Georgia is at the crossroads of Europe and the Middle East. It's also an important route for oil from the Caspian Sea.

In short, Georgia may not be on the forefront of every American's mind, but the country is of great geopolitical significance to the United States.

Activists hold posters and Georgian flags at rally commemorating victims of the Aug. 2008 conflict between Russia and Georgia, near the Russian Consulate in Tbilisi, Georgia, Tuesday, Aug. 7, 2018. The activists protested Russian politics for Georgia within the framework of the events to mark the 10 year anniversary of the Russia-Georgia war.Associated Press/Shakh Aivazov

Prior to the 2008 conflict, Georgia received assurances it would soon join NATO. The war complicated this process, but NATO's General Secretary Jens Stoltenberg recently reaffirmed the alliance's intention to accept Georgia as a member state. Subsequently, Russian President Vladimir Putin warned he would respond aggressively if this occurred.

“This could provoke a terrible conflict. I don't understand what they are doing this for,” Medvedev told the Russia-based Kommersant newspaper.

The Russian prime minister added that Stoltenberg's recent reiteration of NATO's intention to admit Georgia is “an absolutely irresponsible position and a threat to peace.”

The U.S. government has spoken out against Russia's activities in the region but seems reluctant to offer a more forceful response.

Related: That Time The Russian Military Stole A Bunch Of US Marine Corps Humvees In Georgia »

“We strongly support Georgia in calling out Russia and the de facto separatist regimes on human rights abuses in the occupied territories,” Rood added, “and on the continued violation of Georgia's sovereignty and territorial integrity.”

A decade later, a six-day war is still on Georgia's mind

The subject of who fired the first shots in the 2008 Russia-Georgia conflict is a subject of great debate. But the conflict ended in a matter of days after Russian troops pushed past the disputed territories and marched well into Georgia, sparking international condemnation.

The conflict resulted in the deaths of roughly 850 people and displaced hundreds of thousands more.

The six-day war was largely fought over two disputed territories in the region: South Ossetia and Abkhazia.

Russia has occupied these territories since the conflict ended, though the vast majority of the international community recognizes them as part of Georgia. The Russian government at one point agreed to remove its troops from the territories but has not followed through with this pledge.

Tuesday marked the 10th anniversary of the war. Georgians marked it by taking to the streets in Tbilisi and protesting against Russia's ongoing occupation of South Ossetia and Abkhazia.