Claiming it had “irrefutable evidence” of U.S. collaboration with Islamic State on the battlefield, the Russian Defense Ministry on Nov.... 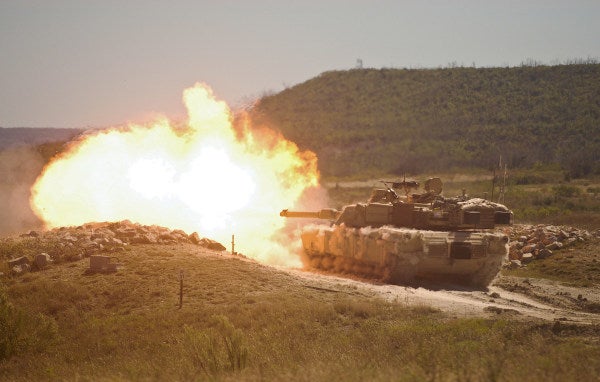 Claiming it had “irrefutable evidence” of U.S. collaboration with Islamic State on the battlefield, the Russian Defense Ministry on Nov. 14 published what it claimed was photographic proof taken by reconnaissance drones — using what turned out to be a screenshot from a video game simulation.

The ministry had captioned the four photos, posted to social media sites, to indicate they had been taken on Nov. 9 and showed an ISIS convoy fleeing Boukamal, the terrorist group’s last stronghold in eastern Syria. But Twitter users soon sniffed out the actual sources, which were all videos posted online more than a year ago.

The doctored photos were also posted on Facebook with a longer statement in Russian, but it was apparently deleted on Nov. 14 afternoon Moscow time as social media users began to call out the use of deceptive photos. A statement in English, but without photos or a reference to the imagery that had been included with the Russian language statement, was still available on Nov. 14.

The Russian Defense Ministry used a screenshot from game ‘AC-130 Gunship Simulator’ video on YouTube to accuse U.S. in cooperation with ISIS in Syria

According to both the Russian and English language statements, the Russian military twice proposed joint operations with the United States to destroy the ISIS fighters fleeing Boukamal last week, but the U.S.-led coalition declined. It said the coalition also prevented Russian and Syrian government forces from attacking the terrorists.

“This is the irrefutable evidence that there is no struggle against terrorism as the whole global community believes,” Russia’s Defense Ministry said on Facebook. “The U.S. are actually covering the ISIS combat units to recover their combat capabilities, redeploy, and use them to promote the American interests in the Middle East.”

The Russian language statement said reconnaissance drones had captured the images, but the interactive mapping news website Liveuamap traced them to their actual sources, including the video game footage posted on YouTube in March 2015.

The Russian Ministry of Defence said they published "irrefutable confirmation" that the U.S. is supporting Islamic State..

..showing a screenshot from a video game as evidence.https://t.co/raIxU7JSWJ pic.twitter.com/oNykFNUBlM

“Russian Ministry of Defense used screen from game ‘AC-130 Gunship Simulator’ video on YouTube to accuse U.S. in cooperation with ISIS in Syria,” the Liveuamap MiddleEast account said on Twitter.

The same gameplay footage racked up more than 10,000 retweets and 20,000 likes on Twitter after a now-deleted account shared it on Nov. 5, claiming it was actual strike footage. Other images in the Russian post came from a pair of videos the Iraqi military released in summer 2016 showing its aircraft striking an ISIS convoy fleeing Fallujah, Liveuamap found.

Army Col. Ryan Dillon, spokesman for Operation Inherent Resolve, said the coalition’s “deconfliction cell” was looking into whether there was any merit to the Russian claims that the United States interfered with their operations. The U.S. and Russia have broadly maintained a special deconfliction line to communicate the locations of U.S. and Russian air and ground forces in Syria since 2015, but Dillon said the Russian statement describes things that don’t reflect typical procedures.

“Typically, they don’t — and we don’t — say, ‘Hey, we want to go after this particular target,’” Dillon said. One side usually indicates an area in which it intends to operate the other side gives its OK, depending on whether there is a conflict with its plans or activities.

A joint U.S.-Russian operation against ISIS like that mentioned in the Russian statement would also be out of the ordinary, he said.

“Their statements are about as accurate as their air campaign,” Dillon said.