Russian Foreign Minister Sergei Lavrov warned the U.S. not to “play with fire” in Syria after a massive escalation in... 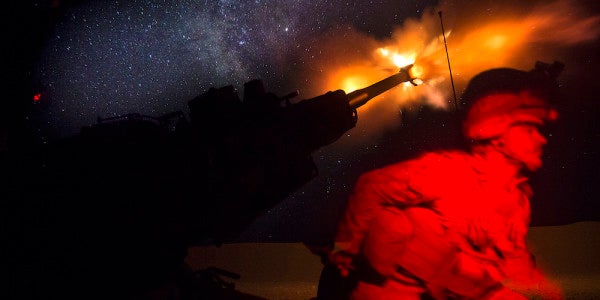 Russian Foreign Minister Sergei Lavrov warned the U.S. not to “play with fire” in Syria after a massive escalation in violence took place on all sides of the multi-faceted conflict earlier this month.

“The U.S. .should stop playing very dangerous games which could lead to the dismemberment of the Syrian state,” Lavrov said at a Middle East conference in Moscow on Monday, according to Bloomberg.

The U.S. has already announced plans to keep Syria divided until UN-sanctioned elections can take place across Syria, and it's made it clear it will respond with force when Russian, Iranian, or Syrian forces threaten that goal.

On February 7, a group of pro-government fighters, who were reportedly majority Russian military contractors, launched what the United States called an “unprovoked attack” on one of its positions in eastern Syria. The U.S. responded with airstrikes and shelling killing between 100 and 300, according to a variety of reports.

Lavrov also spoke of another front in the Syrian conflict, saying that he and his allies in Iran and Syria “are seeing attempts to exploit the Kurds' aspirations,” a reference to the United States' support for Kurdish militias in northern Syria, who aspire to a state all their own.

Turkey views the Kurdish militias as part of a terror group and there is strong popular support in the country for an operation to clear the Kurds off its borders. Allegations of human rights abuses and shocking videos depicting violence against captured, unarmed Kurds have come out of the conflict in northern Syria as the U.S. stands by its Kurdish ally, whom they credit for defeating ISIS in the region.

Turkey has announced its intentions to start shelling the Kurdish town of Afrin in the coming days.

Also during mid-February, Israel launched a massive air campaign against Iranian targets in Syria and lost an F-16 to Syrian air defenses. Syria and Russia now stand accused by an opposition figure of launching a “new holocaust” in rebel-held pockets of Syria, where some 98 people, including women and children, were reported killed on Monday.

“No words will do justice to the children killed, their mothers, their fathers and their loved ones,” UNICEF's regional director Geert Cappalaere began a release on the Syrian government's recent bombing campaign. UNICEF left part of the statement blank to express its frustration.

It's unclear what “fire” Lavrov referenced in Syria, as the country has been in conflict for seven years.

What is clear is that the U.S. has a new foreign policy direction in the country, and it isn't afraid of fighting Iran, Syria, and Russia to keep Assad and Tehran out of power in the besieged country.