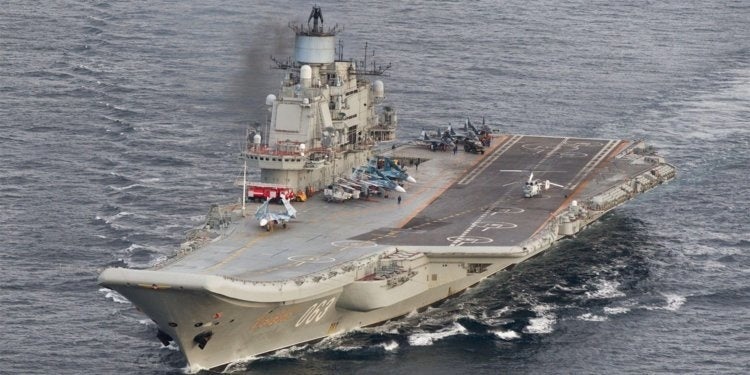 Russia is admitting it may be forced to scrap its only aircraft carrier as the troubled flagship suffered a catastrophic shipyard accident last fall.

The Admiral Kuznetsov, Russia's sole aircraft carrier which was built during the Soviet-era, was severely damaged last October when the massive Swedish-built PD-50 dry dock at the 82nd Repair Shipyard in Roslyakovo sank with the carrier on board.

The carrier was undergoing an extensive overhaul at the time of the incident.

While the ship was able to pull away from the sinking dry dock, it did not escape unscathed. A heavy crane fell on the vessel, punching a large gash in the hull and deck.

By Russia's own admission, the dry dock was the only one suitable for maintenance on the Kuznetsov, and the sudden loss of this facility “creates certain inconveniences.”

“We have alternatives actually for all the ships except for Admiral Kuznetsov,” Alexei Rakhmanov, head of the United Shipbuilding Corporation,
told the state-run TASS news agency in November.

At that time, observers began to seriously
question whether or not it was worth attempting to salvage the carrier given its history of breakdowns and poor performance. As is, the Kuznetsov is almost always accompanied by tug boats, preparation for practically inevitable problems.

The ship is rarely seen at sea. Between 1991 and 2015, the Kuznetsov, sometimes described as one of the worst carriers in the world,
set sail on patrol only six times, and on a 2016 mission in Syria, the carrier saw the loss of two onboard fighter jets in just three weeks.

Now Russian media is discussing the possibility of scrapping the Kuznetsov, putting a Soviet vessel plagued by many different problems out of its misery once and for all, The National Interest
reported Sunday, citing Russian media reports revealing that the carrier “may be written off.”

“Not everyone considers the continuation of repair to be appropriate,” one military source
told Izvestia, a well-known Russian media outlet. “There are different opinions,” the source added, explaining that it might be better to invest the money in frigates and nuclear submarines, a discussion also happening in the U.S. Navy, which is pushing a plan to retire an aircraft carrier decades early.

Another source revealed that even if the ship does return, it may simply serve as a training vessel rather than a warship. Whether or not it will return is a big if given the almost insurmountable challenges of recovery.

The Kuznetsov currently
sits along the wall of the 35th Repair Plant in Kola Bay.

Rather than attempt to salvage a ship that offers limited capabilities to the Russian navy, Russia could instead invest more in smaller, potentially more capable vessels that can be maintained more easily than a carrier that has been problematic since it was first commissioned in 1990.