How The US And Russia Steal Each Others’ Top Military Secrets

Last month, Russia claimed that it recovered U.S. Tomahawk missiles that hit Syria, and would crack their military secrets. Soon... 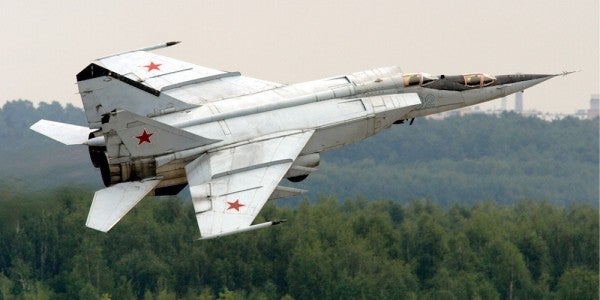 Last month, Russia claimed that it recovered U.S. Tomahawk missiles that hit Syria, and would crack their military secrets.

Soon after, Russia’s Sputnik News published a triumphal piece about various American weapons captured by Russia—or rather its allies—and turned over to Moscow for analysis.

The first American war booty came the Korean War, where the Soviets got their hands on an M46 Patton tank. “Engineers got their hands on several other weapons systems, too, including a late-model F-51D Mustang fighter,” Sputnik noted, ignoring that the Mustang was just a World War II leftover.

Ironically, Sputnik News emphasized that its survey of captured weapons did not include Lend Lease arms sent by the U.S. to the Soviet Union during World War II—which doesn’t count the U.S. B-29 bomber, damaged during a raid on Japan in 1944, that landed in Siberia and was frantically copied by the Soviets to become the Tu-4 bomber.

In September 1958, a Communist Chinese MiG-17 “paralyzed” a Taiwanese F-86 Sabre, which was turned over to Moscow. “The captured Sabre helped Soviet designers immensely in the development of the K-13 short-range infrared homing air-to-air missile, which would go on to serve for several decades,” Sputnik added.

Vietnam proved a treasure trove of American gear, including F-5E fighters that were “used extensively in evaluation flights against the MiG-21bis and the MiG-23, discovering their shortcomings and ultimately aiding in the development of the MiG-23MLD and the supermaneuverable MiG-29 fighter.”

Sputnik News claims that Stinger anti-aircraft missiles, captured by special Soviet commando teams, led to countermeasures that nullified the weapon.In the 2008 Russia-Georgia War, Moscow captured five Humvees “packed with advanced electronics and encrypted communications equipment and refused to give them back despite repeated requests by the Pentagon.”

But in the interests of fair play, we should also point out that America and its allies have captured lots of Russian weapons. During 1951, a British-American team managed to recover a crashed MiG-15 jet fighter.

Soviet-made aircraft also had a habit of being delivered by defectors who didn’t appreciate the virtues of Communism. Most notable was Soviet Air Force Lt. Viktor Belenko, who defected in 1976 with his MiG-25 Foxbat to Turkey, which was examined by U.S. experts before being returned (a Soviet MiG-29 pilot also defected to Turkey in 1989, but Turkey quickly returned the plane thought not the pilot).

Israel has been a Jewish Santa Claus when it comes to delivering captured Russian weapons. The West got its first hands-on look at the MiG-21 fighter when the Mossad convinced an Iraqi pilot to fly his aircraft to Israel. In the 1967 Six-Day War, when U.S. aircraft were being shot down by SA-2 surface-to-air missiles, Israel captured SA-2 systems —complete with their Fan Song radars—for U.S. experts to examine and then build better jammers.

Other gear captured during the Arab-Israeli wars included T-62 and T-72 tanks, BMP infantry fighting vehicles, and Sagger anti-tank missiles. Both sides also lost and benefitted when their various Third World allies changed sides, and offered their new patrons a look at the weapons supplied by their old backers. Iran gave the Soviets a chance to inspect F-14 fighters delivered to the Shah’s air force, while the United States got to see Soviet weapons in Eastern European arsenals after 1989.

None of which is cause for any nationalistic triumphalism. The basic rule of warfare is this: if you use your weapons in combat, your enemies will get their hands on them. Or, at least have a chance to observe them well enough to devise countermeasures.

And that’s why secret weapons don’t stay secret for long.