Editor's Note: This article originally appeared on Business Insider. A new video from the Russian defense ministry shows the country's... 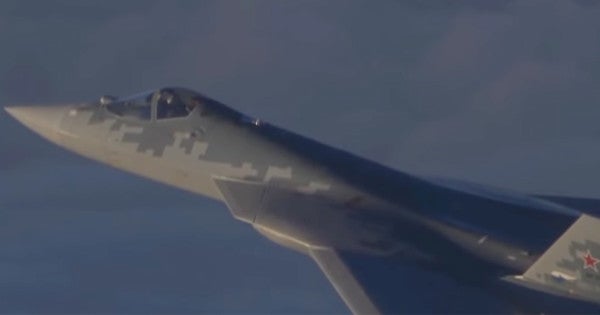 A new video from the Russian defense ministry shows the country's most advanced stealth fighter flying sorties in Syria.

Fifth-generation Su-57 stealth fighters have flown 10 sorties over war-torn Syria, the Russian Ministry of Defense said in a statement accompanying the footage, the first official video to publicly highlight the aircraft's activities in Syria.

Satellite images from February first indicated that Russia had deployed Su-57 fighters to Khmeimim Air Base in Latakia, Syria. The Ministry of Defense later confirmed the deployment. The Russians are admittedly using the bloody civil war in Syria to test some of their latest weapons. The plane has a “need to be tested in combat conditions, in conditions of resistance,” Russian officials previously explained.

The defense ministry said Monday that “the flights were performed to confirm the stated capabilities of the newest plane in a real combat environment.”

The aircraft is said to have participated in the bombing of Syrian rebels and Islamic State forces in support of Syrian President Bashar al-Assad's ground war, which is a rather poor test of the aircraft's combat capabilities.

In comparison, an American F-35, a Su-57 rival, conducted its first combat mission in late September, carrying out an airstrike against Taliban forces. While some hailed the operation as a success, others characterized the combat mission as a waste of resources given the F-35's superior combat capabilities compared to the warfighting capabilities of the Taliban.

Still technically an experimental aircraft, the Su-57, like some of its fifth-generation counterparts, has faced setbacks in development. Nonetheless, the advanced multipurpose fighter built for air superiority and complex attack operations is expected to enter service next year, but only in limited numbers.