Fourteen Russian sailors were killed when a fire broke out while their deep-water research submarine was carrying out a survey of the sea floor near the Arctic, the Russian defense ministry said on Tuesday. 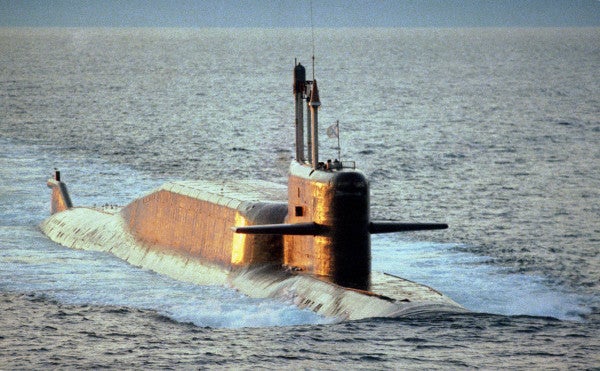 MOSCOW (Reuters) – Fourteen Russian sailors were killed when a fire broke out while their deep-water research submarine was carrying out a survey of the sea floor near the Arctic, the Russian defense ministry said on Tuesday.

A Russian media outlet, RBC, cited an unnamed military source as saying the submarine was nuclear-powered, but Russian officials made no comment on the type of vessel involved.

The incident was the deadliest involving a Russian naval submarine since August 2000, when the nuclear-powered Kursk sank to the floor of Barents Sea after two explosions in its bow, killing all 118 men aboard.

The latest incident also took place in the vicinity of the Barents Sea. Authorities in nearby Norway said they were monitoring but had not detected abnormally high levels of radiation.

“This is a great loss for the navy,” Russian President Vladimir Putin said in a televised meeting with his defense minister, Sergei Shoigu.

“We express our deepest condolences to the families of those who died. We will do everything we can to support them,” said Putin, who canceled a public engagement on Tuesday afternoon to deal with the incident.

Putin told Shoigu to fly to Severomorsk, the Russian naval base on the Barents Sea where the submarine is now located, to find out what caused the incident, and then report back to him.

The incident took place on Monday in Russian territorial waters and the fire has been extinguished, the Russian defense ministry said earlier.

“Fire broke out on board a deep-water scientific research vessel that was studying the marine environment of the world ocean on behalf of the Russian navy,” Interfax news agency cited a ministry statement as saying. “Fourteen submariners died as the result of smoke inhalation.”

The defense ministry did not identify the type or model of the vessel. At their meeting, Shoigu and Putin also made no mention of the type of vessel, or whether it was nuclear-powered.

The RBC news outlet said it was a vessel known by the designation AS-12, which is powered by a nuclear reactor and is designed to carry out special operations at depths where regular submarines cannot operate.

Norwegian officials said they had been in touch with their Russian counterparts but had not been able to establish the type of vessel.

“We have made checks and we are not monitoring too high radiation levels in the area,” Per Strand, a director at the Norwegian Radiation and Nuclear Safety Authority, told Reuters.

He said his agency had seen Russian media reports that a gas explosion took place on board the submarine.

The Interfax news agency quoted the Russian defense ministry as saying that it had not reported a gas explosion to the Norwegian side.

In his meeting with his defense minister, Putin said that of the 14 dead, seven held the rank of captain, first class, and two were holders of the Hero of Russia, the highest military award issued in the post-World War Two period.

“This is not a regular vessel, as we know, it's a scientific research vessel. It's a highly professional crew,” Putin said.

The sinking of the Kursk submarine in 2000, soon after Putin took office, focused official attention on the state of the military and its hardware, which had been subject to underfunding and neglect after the collapse of the Soviet Union.

Since then, Putin has overseen a massive increase in military spending that has allowed the armed forces to renew their equipment and improve training and morale.

However, accidents have continued to happen as the military, used by the Kremlin to project its growing international muscle, has ramped up its activities and extended into new theaters of operation.

In December 2016, a Russian military plane carrying 92 people, including dozens of Red Army Choir singers, crashed into the Black Sea en route to Syria where Russian forces are deployed. Everyone on board was killed.

Russia's military has been developing new submarines as part of a broader push for new defense hardware under Putin that has also included hypersonic missiles and naval drones.

U.S. media have cited Pentagon officials as saying they are concerned about the increased activities of Russian submarines and spy ships operating in the ocean off the U.S. coastline.

According to an archived report in Russian newspaper Izvestia, the AS-12 submarine was first launched in 2003 and is known by the nickname “Losharik”.

It is made out of a series of inter-connected spheres, which are stronger than the conventional submarine construction and allow the AS-12 to resist water pressure at great depths.

The plant that built the vessel declined to disclose any details about it, citing secrecy rules, Izvestia reported.