Russia put on an intimidating show of force in 2015 by unveiling the T-14 Armata main battle tank, which represented a bold new design billed as an unstoppable NATO tank killer. So much for that 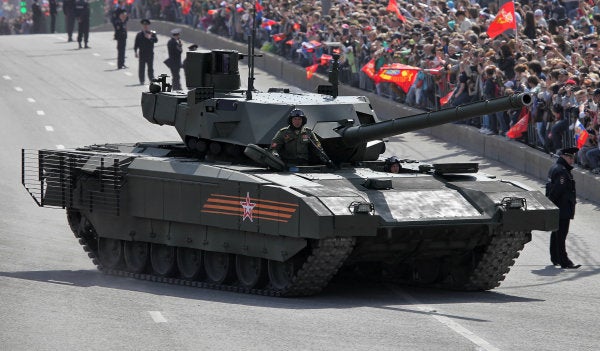 Russia put on an intimidating show of force in 2015 by unveiling the T-14 Armata main battle tank, which represented a bold new design billed as an unstoppable NATO tank killer.

Four years later, Russia has scrapped plans to reproduce the tank that sputtered and stalled in Moscow's Red Square in the 2015 Victory Day parade, and found an older tank to do its job instead.

Russia on Thursday announced it had bought 30 WWII-era T-34 battle tanks from Laos, which it said were combat-ready, but would be used in parades and making WWII movies.

As The Drive pointed out, this means Russia will buy more of the 70-year-old tanks than it will of its new T-14, and it indicates how Russian President Vladimir Putin has changed course after failing to modernize his military.

T-14: The NATO killer that died in budget cuts

The T-14 in 2015 cast a menacing figure. Russia, previously crippled by debt and still shrugging off the collapse of the Soviet Union, had updated its main battle tank, something Western countries had only done incrementally.

While the US was adapting its M1 Abrams tank to urban combat against weaker enemies in Iraq, Russia had devised a tank designed to kill other tanks.

With automatic loading, an unmanned turret, reactive and active armor, and a bigger gun than any Western tank, Moscow had announced its focus on a return to the kind of conventional ground war that rocked Europe throughout the 21st century.

But like with many Russian defense projects, the bark proved worse than the bite. In the following years, Russia announced the T-14 wouldn't see mass production. Instead, Russia would upgrade its capable T-80 and T-90 tanks which were seeing combat in Ukraine and Syria.

While the upgraded T-90 tanks proved effective in those battlefields, they lacked the propaganda boost of a new, unstoppable tank afforded Putin.

Pivot to the past

T-34 Tanks mod. 1942 made at the Uralmash plant headed to the front in February 1942(Wikimedia Commons/RIA Novosti archive)

Putin's bet on the T-14 as the future face of Russia's military power failed, but, ever resourceful, Russia has now pivoted to the past.

Soviet tankers with T-34s in the eastern front of WWII fought in grueling battles that eventually saw Adolf Hitler's Nazi forces overwhelmed and the Soviet flag planted atop the Reichstag in Berlin.

Putin has frequently tried to revise and leverage the Soviet's hard-fought success in World War II to bolster nationalism and support for his aggressive government, which stands accused of war crimes in Syria and backing separatist forces in Ukraine.

A state-funded film titled “T-34,” which tells the story of a Russian tank crew escaping a Nazi camp, smashed box office records in Russia in January. The Associated Press reported that any criticisms of the film have been silenced.

Now Russia will seek to use the T-34s in other propaganda spectacles, it said.

Russians have every reason to be proud of their country's massive sacrifice in WWII and the tanks that have operated for seven decades.

But the tanks, be they T-34s or T-14s, won't lift Russians out of poverty or allow them to enjoy any new opportunities.

Nor will they fight in wars, as they've always been pawns in a propaganda game deftly executed by Putin to scare the West with paper tigers and feed the public with empty stories of bygone greatness.