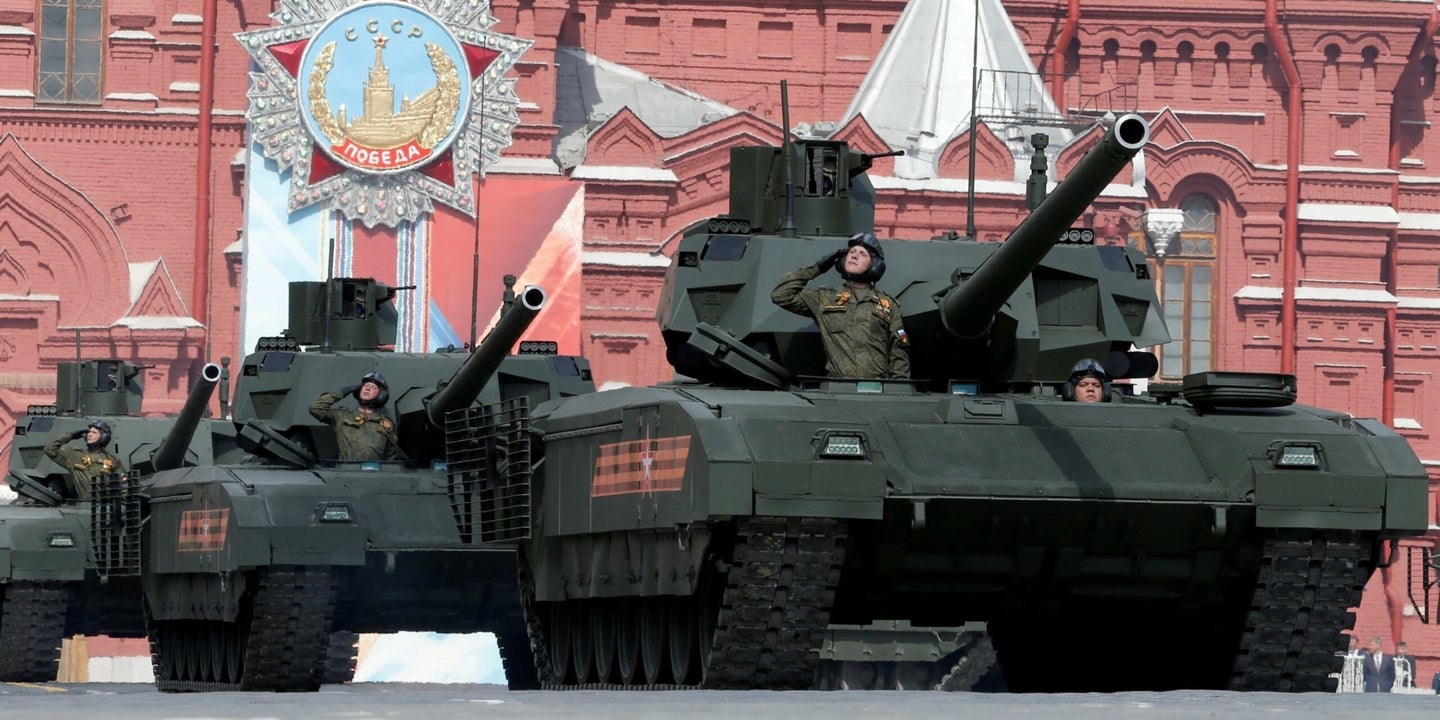 The days of relieving themselves in fuel and ammo cans or hopping out to dig single-use latrines are apparently over for Russia's tank crews, at least those manning the T-14 Armata tanks, Ilya Baranov, a senior official at the Ural Design Bureau of Transport Machine-Building in Yekaterinburg, told TASS News Agency.

“A major hassle for is that they cannot relieve their natural functions,” Baranov explained, “That is, water and field rations are available in the tank, but all the other conveniences are, unfortunately, absent.”

The Armata has solved this problem. “This tank provides this possibility for a crew to perform lengthy combat missions” without having to stop, he said.

The T-14, presented as a devastating supertank featuring upgraded armor, armaments, and engine technology, made its public debut at the 2015 Moscow Victory Day Parade, where one embarrassingly broke down and had to be towed away during rehearsal.

Russia had initially intended to mass produce and field as many as 2,300 Armatas by 2025, but, as has been previously reported, that number has been reduced to no more than 100, The War Zone reported last year. Russia has less than two dozen prototypes available for testing.

State trials for the T-14 are expected to begin this year, and the first Armatas will be delivered to the 1st Guards Tank Regiment of 2nd Guards Tamanskaya Motor Rifle Division, according to The Diplomat.

As early as 2015, there were signs that the cost of this state-of-the-art tank, which includes an unmanned turret and other expensive features, was way over budget. The actual cost of the Armata was estimated to be 2.45 times the figure in the State Armaments Program for 2020.

The T-14 program never took off like the Russians hoped. Instead of buying more Armatas, Russia has opted to upgrade and improve its older T-72, T-80, and T-90 tanks, capable armor but nothing like what Russia promised for the Armatas.

The decision to invest elsewhere came with excuses similar to those made for the country's problematic Su-57 fifth-generation stealth fighter, the mass production of which has been put off in exchange for improvements to the country's fourth-generation fighters.

“These models are quite expensive in relation to existing ones,” Russian Deputy Prime Minister Yuri Borisov said of the T-14 tanks last July. “Why flood all the armed forces with the Armata tanks?” Repeated budget cuts simply put mass production of the much touted supertank out of reach.

But even with the tanks being over budget, it appears that Russia considers onboard lavatories a priority for the next-generation battle tanks.

WATCH NEXT: Russia Just Picked Up Some Used T-34 Tanks