The years have not been kind to Russia's sole, geriatric aircraft carrier Admiral Kuznetsov. It appears, however, that the Russian Navy is refusing to throw in the towel 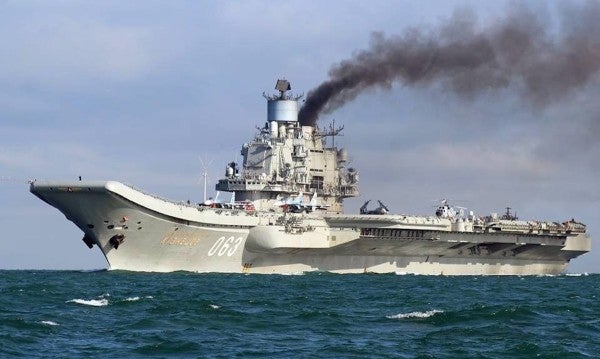 The years have not been kind to Russia's sole, geriatric aircraft carrier.

Followed by billowing black smoke and massive tugboats wherever it goes, Admiral Kuznetsov has long been an object of derision in the defense commentary sphere.

The usual sense of levity accompanying Admiral Kuznetsov coverage turned to tragedy in 2018, when a 70-ton crane smashed into the carrier's hull. Almost as devastating as the considerable damage to the carrier itself was the loss of PD-50, Kuznetsov's floating drydock that sank from the blow's impact. The 2018 drydock disaster spawned a deluge of articles speculating as to Kuznetsov's fate, with many predicting its long-awaited decommission.

It appears, however, that the Russian Navy is refusing to throw in the towel.

Earlier this month, a Russian defense industry insider told the state media outlet TASSthat Kuznetsov will be docked for repairs in 2020: “The phase of repairs in a dry dock will begin in 2020, provided the facilities required are in place and the dock's capacity is increased.”

The wording of the latter phrase is particularly interesting, in that it suggests that the needed drydock renovations are still at an early stage and may suffer unexpected setbacks.

Nonetheless, the United Shipbuilding Corporation (JSC)—Russia's state-owned shipbuilding conglomerate—insists that both the repair and refit stages will be completed by the initial target of 2021. “It's a complex package of measures, so we foresee a certain postponement of the second docking of the ship, but the eventual deadline for completing the repairs and upgrade – 2021 – will remain unchanged,” according to the company.

As previously described by The National Interest, Russia lacks a suitable replacement for PD-50. Instead, the JSC plans to expand the 35th ship repair plant in Murmansk where Kuznetsov was first stationed after the 2018 accident. There, the whopping “52 defects” sustained by Kuznetsov will be repaired, and the rest of the carrier will undergo a deep modernization involving the replacement of its “power equipment, boilers, pumps, flight equipment, observation and control systems.”

Leaving aside the serious hull damage that will cost approximately one billion dollars (seventy million rubles) to repair, the latter upgrades alone will place considerable strain on a Russian naval budget already being stretched thin by ambitious submarine and corvette projects. Now, more than ever, a difficult question stands before the Russian military-industrial complex: at what point does a deep refit become so deep that it makes more financial sense to simply start from scratch on a new aircraft carrier generation?

Even more fundamentally, does the Russian military really need an aircraft carrier?

They seem to believe that they do, but there are arguments to the contrary; one of the most compelling is their own naval modernization strategy, which continues to eschew size and power projection capabilities in favor of specialized, cost-effective submarines and corvettes meant to secure Russia's maritime frontiers.

It is not clear how, if at all, Admiral Kuznetsov fits into this emerging pattern. Russian defense analysts have reasoned along similar lines, rightly observing that the Kuznetsov's repair bill can easily finance the construction of several vessels that better align with Russia's current naval needs.

SEE ALSO: Russia Is Planning To Build Its First Nuclear-powered Aircraft Carrier After Breaking Its Only Existing Garbage Flattop

WATCH NEXT: Two Carriers At The Same Time, Man