Who Really Shot Down That Russian Aircraft Over Syria?

The Kremlin is attempting to tamp down tensions following the downing of a Russian Ilyushin Il-20M Coot-A intelligence, surveillance, and... 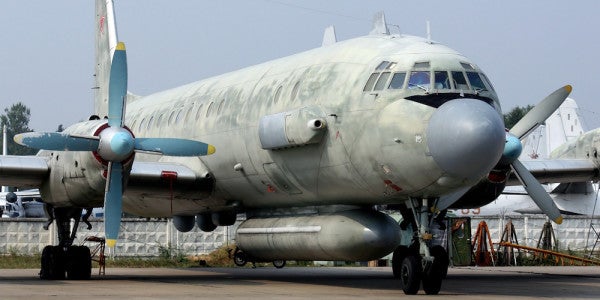 The Kremlin is attempting to tamp down tensions following the downing of a Russian Ilyushin Il-20M Coot-A intelligence, surveillance, and reconnaissance (ISR) aircraft by Syrian air defenses during an Israeli raid on Assad regime forces.

An Assad regime operated S-200 surface-to-air missile battery shot down the four-engine Russian turboprop as it attempted to engage four Israeli-owned Lockheed Martin F-16 fighters that were attacking Syrian targets. Fifteen Russian servicemen were killed during the incident, but officials in Moscow and Tel Aviv moved quickly to defuse tensions even though the Russian Ministry of Defense initially responded with fury against the Israelis. However, Russian president Vladimir Putin promptly ascribed the incident to the fog of war.

“In this case, it is more a chain of tragic circumstances because an Israeli fighter did not down our aircraft,” Putin said during a September 18 press conference. “It goes without saying that we must get to the bottom of this. Our attitude towards this tragedy is set forth in a statement by our Defense Ministry, and has been fully coordinated with me.”

Putin noted that this event is different from the November 2015 incident where a Turkish F-16 shot down a Russian Sukhoi Su-24 Fencer bomber when it briefly entered Turkish airspace. “As for your comparison with the downing of our plane by a Turkish fighter, this was a different situation,” Putin said. “The Turkish fighter deliberately shot down our aircraft.”

Indeed, in this particular case, it seems that the Syrian air defense forces on the ground misidentified the Russian surveillance plane during the Israeli strike. The Russians claim that the Israeli Air Force used the Il-20 as cover under the assumption that the Syrians would not endanger a Russian aircraft. “It’s clear to any specialist the strike was delivered using our Ilyushin-20 as cover, because they thought the Syrian air defense systems would not act in that direction,” Russian defense minister Sergei Shoigu stated according to the state-owned TASS news agency.

The Russian Ministry of Defense also expressed its dismay that Israel had not given Moscow much warning before Tel Aviv launched its raid. “The Israeli side didn’t issue a notification or, to be more precise, they warned us a minute before conducting the strike,” Shoigu said. “They told us they were about to attack facilities on the Syrian territory, and they did it. . . . As a result of countermeasures to the Israeli attack, the Syrian air defense troops brought down the Ilyushin-20.”

The Israelis expressed their sorrow for the loss of the Russian servicemen but placed the blame squarely on the Syrians. “Israel expresses sorrow for the death of the aircrew members of the Russian plane that was downed tonight due to Syrian anti-aircraft fire,” the Israel Defense Forces (IDF) said. “Israel holds the Assad regime, whose military shot down the Russian plane, fully responsible for this incident . . . Israel also holds Iran and the Hezbollah terror organization accountable for this unfortunate incident.”

The IDF explained that its F-16s were targeting a Syrian Armed Forces facility “from which systems to manufacture accurate and lethal weapons were about to be transferred on behalf of Iran to Hezbollah in Lebanon.” From Tel Aviv’s perspective, Israel cannot tolerate such a threat. “These weapons were meant to attack Israel, and posed an intolerable threat against it,” the IDF stated.

Israel says that it did warn Moscow of its impending raid on Syria via its deconfliction line. However, it was “extensive and inaccurate” Syrian ground fire that downed the Russian plane. In fact, Israeli jets had already departed the area and were back inside Israeli airspace when the Syrians shot down the Russian Il-20.

“When the Syrian Army launched the missiles that hit the Russian plane, IAF jets were already within Israeli airspace,” the IDF said. “During the strike against the target in Latakia, the Russian plane that was then hit was not within the area of the operation. . . . The Syrian anti-air batteries fired indiscriminately and from what we understand, did not bother to ensure that no Russian planes were in the air.”

The IDF also promised to cooperate with Russia to help investigate the incident. “Israel will share all the relevant information with the Russian Government to review the incident and to confirm the facts in this inquiry,” the IDF said.

In addition to the IDF statement, Israeli prime minister Benjamin Netanyahu also called to express his regrets to Putin on behalf of his nation. “The prime minister, in the name of the State of Israel, conveyed sorrow over the deaths of the Russian soldiers and said that the responsibility for downing the plane falls on Syria,” a statement from the Israeli prime minister’s office said .

Putin, for his part, urged Israel “not to let such a situation happen in the future” in which Tel Aviv violates Syrian territory and Moscow gets caught in the crossfire. Indeed, the Russian Il-20 is the first inadvertent Russian casualty in Israel's efforts to roll back Iranian influence from near its borders.

“This is the first Russian casualty in the Israeli-Iranian war of attrition,” Center for Naval Analyses analyst Michael Kofman told the National Interest. “Fortunately for the Israelis, it was the Syrian military who shot down the plane. But Israel is playing a dangerous game, with maximalist objectives to roll back Iranian presence in Syria.”

While Putin’s and Netanyahu’s quick actions likely prevented an escalation in tensions, Russia will have to respond in some way. Right now, that response seems to be aimed at securing its forces. “As for reciprocal action, this will be primarily aimed at ensuring additional security for our military and our facilities in the Syrian Arab Republic,” Putin said. “These steps will be seen by everyone.”

Russia might have to take additional actions such as improving the Identification Friend or Foe (IFF) systems on both Russian and Syrian operated systems. In addition, Moscow may have to invest more in training Assad’s troops to a better level of competence to ensure that such an incident is not repeated. Ultimately, the real culprit for the downing of the Il-20 is the incompetence and lack of professionalism among the Syrian forces.