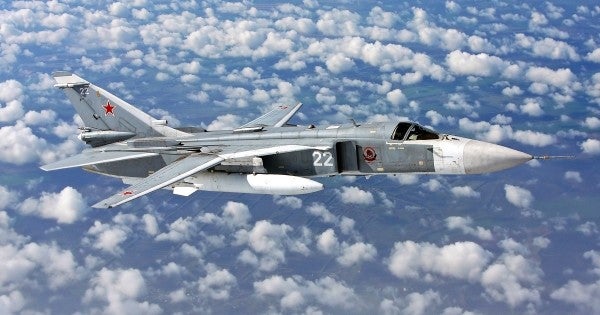 The Su-24 supersonic bombers took off from Monchegorsk air base on the Kola Peninsula, flew out over the Barents Sea then turned and formed into an attack formation before zooming toward the Norwegian town of Vardø, Lunde recalled.

“Located on a small island on the Barents Sea coast, Vardø is traditionally a fishing town, but its location close to Russia's heavy militarized Kola Peninsula makes it a perfect location for radar surveillance,” The Barents Observer explained.

“The so-called Globus-II radar has for decades been a thorn in relations between Moscow and Oslo. Officially the radar observes objects in space,” the news site continued. “It is also believed to be highly capable of monitoring and building a signature database of Russian ballistic missiles.”

“The radars in Vardø are operated by the Norwegian Intelligence Service.”

Russia frequently conducts mock air and commando raids, both as practice for war-time operations and as a form of intimidation targeting rival states.

Russian forces in July 2018 daringly simulated an assault on Gogland Island in the Finland Sea just south of Sweden. The island is Russian territory.

“The difficulty of landing on the coast of the island was the unpreparedness of the site and the choppy wind that is characteristic of all the islands of the Gulf of Finland,” the Kremlin stated.

“The special forces left the side of the Mi-8AMTSH helicopter at an altitude of 2,500 meters three kilometers from the island.”

The commandos used satellite navigation to steer themselves to the landing zone, the Russian statement continued. “After landing, the scouts disguised the parachutes and advanced into the interior of the island.”

Shortly before the island raid and around the same time as the mock attack on Vardø, 17 Russian warplanes buzzed the Royal Navy destroyer HMS Duncan in the Black Sea.

The same month, a separate Russian force pretend-bombed military installations in the vicinity of Bodø, the home of the Norwegian military's joint headquarters and its fleet of F-16 fighters.

In April 2014, a Russian Su-24 made several passes near the U.S. Navy destroyer USS Donald Cook in the Black Sea. “It would be real interesting to see what shows up in the Russian papers in the morning, how they play it,” Rick Hoffman, a retired Navy captain, told Navy Times .

A few months prior to the Donald Cook incident, two Russian Su-27 fighters and four Tu-22M bombers simulated attack runs against Poland, the Baltic countries and the southern tip of Öland in Sweden.

At least some of those mock attacks matched the profile of a nuclear strike, NATO officials admitted in 2016.

“As part of its overall military build-up, the pace of Russia's military maneuvers and drills have reached levels unseen since the height of the Cold War,” Jens Stoltenberg, then the secretary general of NATO, warned in 2015.

Reacting to Russia's attempted intimidation of HMS Duncan, Royal Navy lieutenant commander James Smith was defiant. “They may consider it to be escalatory, we certainly don't,” Smith toldThe Daily Mail . “But it depends on how you spin the narrative. The one thing the Russians are very good at is spinning a narrative.”

“We have to demonstrate and create our own as well,” Smith continued. “They can scream and shout all they want but we still have the right, as do all these units, to be where we are, operating how we are.”

SEE ALSO: Marines Will Get More Norway Deployments, And Russia Will Not Be Happy

WATCH NEXT: Marines Train In Norway