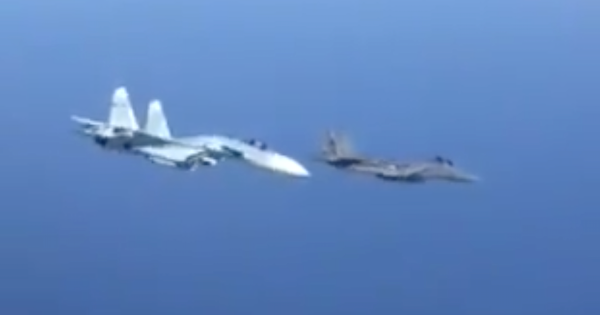 It is unclear when the video was filmed, with some speculating that it occured during a prior NATO BAP (Baltic Air Policing) mission. When viewed in that light, this incident seems to fall into the trend of what US officials have previously described as ” unsafe” Russian interceptions and “aggressive maneuvers” in high-tension airspace.

#BREAKING: A #Russian Air Force pilot has released this video showing how a #RuAF Su-27P (from 72nd Guards AvB) dangerously banked in front of a #USAF's F-15C of 493rd Fighter Squadron while it was patrolling over #Baltic Sea as a part of #NATO Baltic Air-policing mission. pic.twitter.com/zVU5dN4rpe

Russian tactical aircraft in the Baltic region have previously been accused of flying with their transponders off, which would certainly compound an already-tense interception. The Russians have levied similar accusations against western aircraft operating in the region; most recently, against an unidentified Swedish Gulfstream surveillance craft intercepted by an Su-27.

But Russian media and military experts provide an entirely different context, arguing that it was the F-15 that engaged in “provocative” and “reckless” behavior by allegedly intruding on the flight path of a Russian government plane being escorted by the Su-27 in question.

The Su-27's pilot was just doing his job, military expert Andrei Krasnoperov told Russian state news outlet RIAFAN : “Our government officials frequently fly, and are obviously going to be accompanied by our Su-27's. Our fighters don't intend to attack anyone, but they also cannot allow any encroachment on the flight path of the unarmed VIP plane. When the F-15 tries to fly close to such a plane, we don't know what the NATO pilot is thinking– he could occupy the VIP's flight course, he can try to attack the plane, etc. To deter all of this, our pilots don't allow near planes that are being escorted. In the video, our Su-27 executed a pinning maneuver on its left axis to let the F-15 pilot know: there is nothing to be gained here . He was clearly warned: turn back, or we'll both go down .”

Krasnoperov went on to praise the professionalism of Su-27 interceptor pilots, further driving home the point that this interception was standard procedure, not a spur-of-the-moment decision by a hot-headed pilot: “… we don't have rookies, and our pilot knows the plane's capabilities. He knows how the Su-27 responds to various control commands, he knows much much to tilt, how much to thrust, and all the rest.”

The Russian account is not implausible, given that Kremlin officials frequently fly to and from Kaliningrad– a Russian enclave in Europe nestled between several NATO countries– over Baltic airspace. For instance, a similar altercation between an Su-27 and F-16 occured in June 2017 while Russian Defense Minister Sergei Shoigu was en route to Kaliningrad onboard a Tu-154 airliner.

Even so, there are currently no corroborating details to confirm or dismiss the Russian account. Interceptions are exceedingly common in the Baltic region, though some are more tense than others; as Krasnoperov points out, the Su-27 pilot was trained and apparently ready to attack the F-15C had it not promptly veered off course.

Whatever the details may be, this incident reveals an unsettling truth about the ease with which the Russia-NATO military buildup in the Baltic can lead to direct military confrontation.