A Russian fighter jet reportedly made unsafe maneuvers near a U.S. aircraft flying over the Black Sea, CNN reported on Nov. 17.... 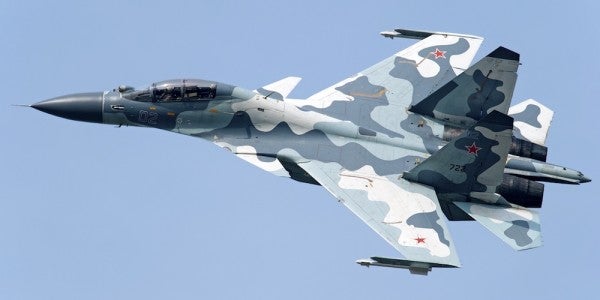 A Russian fighter jet reportedly made unsafe maneuvers near a U.S. aircraft flying over the Black Sea, CNN reported on Nov. 17.

The maneuver left “violent turbulence” in its wake, forcing the P-8A to deal with a 15-degree roll, according to Baldanza. The incident reportedly lasted 24 minutes.

A U.S. RC-135U flying in international airspace over the Baltic Sea is intercepted by a Russian Su-27 Flanker on June 19, 2017. A Russian Su-30 fighter flew within 50 feet of a U.S. Navy P-8A Poseidon surveillance aircraft traveling over the Black Sea on Nov. 26, 2017.Photo via U.S. European Command

“The U.S. aircraft was operating in international airspace and did nothing to provoke this Russian behavior,” Baldanza said in the report. “Unsafe actions‎ have the potential to cause serious harm and injury to all aircrews involved.”

In June, an armed Russian Su-27 fighter jet intercepted a U.S. RC-135 reconnaissance plane over the Baltic Sea, coming as close as five feet. The two aircraft were operating in international airspace; however, a US Air Force spokesperson said at the time that “there are international standards to ensure safety and prevent incidents.”

The latest incident comes amid Russia's accusations, made earlier this month, in which they called the U.S.-led coalition force combating Islamic State militants in Syria “occupying forces.”

Russia, a key ally to Syria's embattled leader, President Bashar al-Assad, has been at odds with U.S. forces and their allies during the Syrian civil war.