The U.S. Navy said on Wednesday that one of its aircraft was intercepted by a Russian jet while flying in international airspace over the Mediterranean Sea 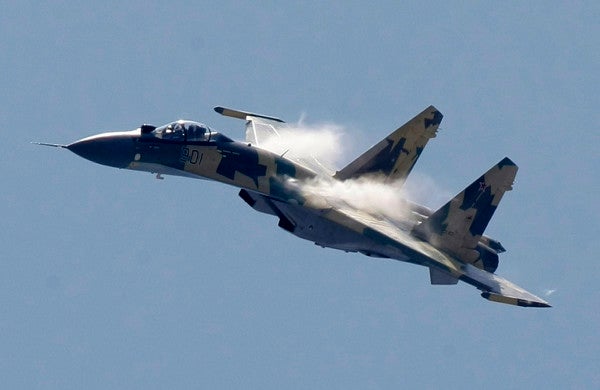 The U.S. Navy said on Wednesday that one of its aircraft was intercepted by a Russian jet while flying in international airspace over the Mediterranean Sea.

The Navy P-8A Poseidon, an anti-submarine and anti-surface warfare aircraft, was flying over the over the Mediterranean Sea when it was approached by a Russian SU-35 fighter jet, according to U.S. Naval Forces Europe-Africa.

“The interaction was determined to be unsafe due to the SU-35 conducting a high-speed, inverted maneuver, 25 [feet] directly in front of the mission aircraft, which put our pilots and crew at risk,” the Navy said in a statement.

The crew of the P-8A Poseidon was said to have experienced “wake turbulence” during the 42-minute encounter.

“While the Russian aircraft was operating in international airspace, this interaction was irresponsible,” the Navy added. “We expect them to behave within international standards set to ensure safety and to prevent incidents.

A Russian SU-35 jet performed a similar maneuver toward a P-8A Poseidon over the Mediterranean Sea in June 2019. The jet buzzed the U.S. aircraft three times in a three-hour span, and conducted a pass directly in front of it.

“This interaction was irresponsible,” the Navy said in a statement at the time.

On both occasions, the Navy said its aircraft was flying in international airspace and was not provoking the Russian aircraft.

The recent encounter comes as Russia performed another provocative test by firing an anti-satellite missile on Wednesday, according to U.S. Space Command.

“Russia's [direct-ascent anti-satellite] test provides yet another example that the threats to US and allied space systems are real, serious and growing,” Gen. John Raymond, the head of Space Command and chief of space operations for U.S. Space Force, said in a statement Wednesday.

“The United States is ready and committed to deterring aggression and defending the nation, our allies, and U.S. interests from hostile acts in space,” Raymond added.

great power competition
How The Other Half Fights
intercepts
mediterranean
news