If it flies, it dies. 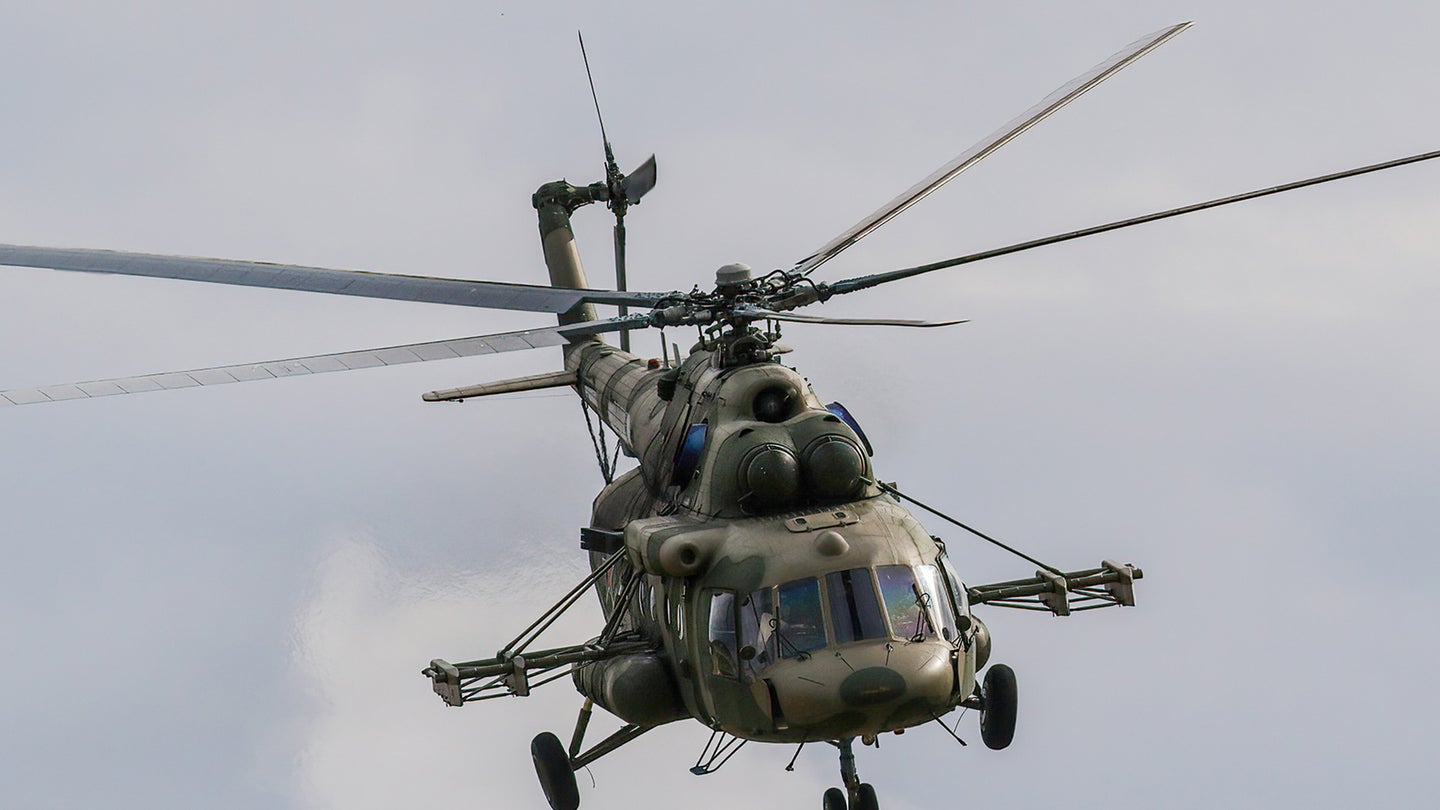 A new video showing a Russian Mi-8 helicopter being shot down by Ukrainian forces underscores how the Russians have failed to gain air superiority more than eight months after launching their full-scale invasion of Ukraine.

On Monday, Ukrainian soldiers with the 54th Mechanized Brigade posted a video on Telegram showing a Russian helicopter being hit by a missile in the Donbas region of Ukraine.

Whereas U.S. helicopters in Iraq and Afghanistan were forced to fly low and in the nape of the earth to counter the threats posed by man-portable air defense systems, the Russian helicopter seen in the video appears to fly straight and level before and after it is hit by the missile.

The damaged helicopter was able to keep flying for roughly a minute as a fire broke out aboard the aircraft and rapidly grew larger, engulfing everything inside of the helicopter until it crashed.

Navy Reserve Lt. Cmdr. Jack McCain tweeted that he was struck at how the Russian helicopter did not land right after being struck by the missile.

Under U.S. military procedures, if a fire breaks out aboard a helicopter, the crew must take immediate steps to put the fire out, such as cutting fuel to its engine, McCain told Task & Purpose. If the fire cannot be extinguished, the pilots must land immediately.

“That aircraft, if you watch the video, is flying over an open field,” McCain said. “I am not an Mi-8 pilot, but most helicopters operate fairly similarly: The procedure would be a quick flare [raising the nose] to bleed off airspeed and then a drop to the ground.”

The fact that the Ukrainians knew where to position a camera to get a perfect shot of the helicopter being hit indicates that the aircraft was flying on a route that it had used before, McCain said.

McCain also noted that the Russian helicopter appeared to be following a road, a dangerous technique while over enemy territory.

“Roads, while easy to follow from the air, are places where it’s also easy to store equipment and are known travel routes for people,” McCain said. “Generally, you want to minimize your time crossing over or being near a road.”

It is unclear what type of weapon system was used to down the Russian helicopter, but the United States has provided the Ukrainians with more than 1,400 Stinger shoulder-fired anti-aircraft missiles since February, according to the Defense Department.

The Russians have lost a significant number of aircraft since the invasion of Ukraine began, including at least 23 Ka-52 Alligator attack helicopters – more than a quarter of its total fleet of about 90 mission capable Ka-52s, according to our colleagues at The War Zone.

Air Force Brig. Gen. Patrick Ryder, the Pentagon’s top spokesman, had no information when asked at a Tuesday news conference if the Defense Department has an estimate for how many helicopters and fixed-wing aircraft the Russians may have lost.

While the Ukrainian military claims to have shot down 274 Russian military jets and 252 helicopters since February, those figures are likely inflated, said retired Marine Col. J.D. Williams, a defense policy researcher with the RAND Corporation.

One reason why the Russians have yet to control Ukraine’s airspace is that the Ukrainian military successfully dispersed its air defense systems before the invasion, making it more difficult for the Russians to find and attack them, Williams said.

“They have also been judicious in how they have employed their air defense systems, being careful to use them when they have a tactical advantage or to protect high value units or facilities,” Williams said.

Meanwhile, the Russian military has not made destroying Ukrainian air defenses a top priority, nor have the Russian forces shown much skill at coordinating aviation and ground units to suppress Ukraine’s air defense systems, he said.

“As a result, the Russians have had to adopt a more cautious approach in employing their aircraft, employing stand-off weapons that can be launched from behind Russian lines or flying at high altitudes to avoid short-range air defense systems; the effectiveness of Russian air attacks are thus reduced by not being able to engage targets from close range,” Williams said.

Not only did the Russians gravely underestimate Ukraine’s air defenses and the West’s ability to provide the Ukrainians with more anti-aircraft weapons, but the Russian military has been unable to adapt to and overcome the way that Ukraine uses all its air defense systems, said Karolina Hird, a Russia analyst with the Institute for the Study of War think tank in Washington, D.C.

The problems that Russian military aviation has faced in Ukraine are emblematic of the struggles facing the entire Russian military, which have prevented it from fighting as well as many experts had expected at the onset of the invasion, Hird told Task & Purpose.

“It’s the ultimate question: How did this all go so wrong?” Hird said. “I think if we’re talking specifically about the air campaign, it’s a combination of factors: Poor training, maybe slightly outdated equipment, and also just command and control – the issues we’ve been seeing with operational commanders not necessarily translating down to tactical levels in the appropriate way. These things affect the airspace as well.”

Ultimately, Russia’s failure to gain air supremacy over Ukraine at the start of this conflict has meant doom for many Russian pilots, including the crew of the Mi-8 that was shot down recently. Both in the air and on the ground, Russian troops are serving as cannon fodder.