Leaked audio recordings said to be of Russian mercenaries in Syria capture expressions of lament and humiliation over a battle... 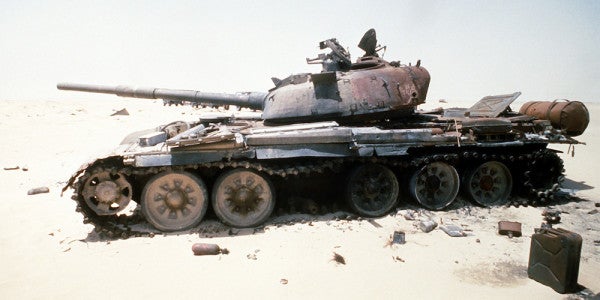 Leaked audio recordings said to be of Russian mercenaries in Syria capture expressions of lament and humiliation over a battle in early February involving U.S. forces and Russian nationals.

Published by Polygraph.info — a fact-checking website produced by Voice of America and Radio Free Europe/Radio Liberty, news organizations that receive funding from the United States government —the audio recordings paint a picture of Russian mercenaries essentially sent to die in an ill-conceived advance on a U.S.-held position in Syria. Polygraph says the audio recordings are from a source close to the Kremlin.

The Pentagon has described the attack as “unprovoked” and started by forces loyal to the Syrian government that crossed over the Euphrates River, which functions as a border between U.S.-backed troops and Russian-backed ones.

The Pentagon says that about 500 men began to fire on the position and that the U.S. responded with air power and artillery strikes. The audio from Polygraph seems to confirm that while giving some insight into the feelings of the defeated forces.

Related: Russia Warns US Not To ‘Play With Fire’ In Syria After Massive Battle Reportedly Killed Hundreds »

Also apparent in the audio is displeasure with how Russia has responded to the situation. Initially, Russia denied that its citizens took part in the clash. Later, a representative said five may have died. Last week, Russia's Foreign Ministry said in a statement that the fight left “several dozen wounded” and that some had died.

The audio recordings, in which voices can be heard saying 200 people died “right away,” appear to back up reports from Reuters, Bloomberg, and the Pentagon that roughly 100 — if not more— Russians died in the fight. Reuters has cited sources as saying the advance's purpose was to test the United States' response.

Russia is thought to use military contractors in Syria rather than its military — experts speculate it's to maintain deniability for acts of war and conceal the true cost of fighting from the Russian people. The Washington Post reported last week that U.S. intelligence reports with intercepted communications showed that a close ally of Russian President Vladimir Putin told a senior Syrian official he “secured permission” from the Kremlin before the advance on the U.S. forces.

The accounts in the audio also align with reports of how the battle went down, depicting an unprepared column of troops meeting an overwhelming air response before helicopter gunships strafed the remaining ones.

Here are the translated transcripts from Polygraph:

“The reports that are on TV about … well, you know, about Syria and the 25 people that are wounded there from the Syrian f— army and — well … to make it short, we've had our asses f— kicked. So one squadron f— lost 200 people … right away, another one lost 10 people … and I don't know about the third squadron, but it got torn up pretty badly, too … So three squadrons took a beating … The Yankees attacked … first they blasted the f— out of us by artillery, and then they took four helicopters up and pushed us in a f— merry-go-round with heavy caliber machine guns … They were all shelling the holy f— out of it, and our guys didn't have anything besides the assault rifles … nothing at all, not even mentioning shoulder-fired SAMs or anything like that … So they tore us to pieces for sure, put us through hell, and the Yankees knew for sure that the Russians were coming, that it was us, f— Russians … Our guys were going to commandeer an oil refinery, and the Yankees were holding it … We got our f— asses beat rough, my men called me … They're there drinking now … many have gone missing … it's a total f— up, it sucks, another takedown … Everybody, you know, treats us like pieces of s— … They beat our asses like we were little pieces of s— … but our f— government will go in reverse now, and nobody will respond or anything, and nobody will punish anyone for this … So these are our casualties.”

“Out of all vehicles, only one tank survived and one BRDM after the attack, all other BRDMs and tanks were destroyed in the first minutes of the fight, right away.”

“Just had a call with a guy — so they basically formed a convoy, but did not get to their f— positions by some 300 meters. One unit moved forward, the convoy remained in place, about 300 meters from the others. The others raised the American f— flag, and their artillery started f— ours really hard. Then their f— choppers flew in and started f— everybody. Ours just running around. Just got a call from a pal, so there are about 215 f— killed. They simply rolled ours out f— hard. Made their point. What the f— ours were hoping for in there?! That they will f— run away themselves? Hoped to f— scare them away? Lots of people f— so bad can't be f— ID'd. There was no foot soldiers ; they simply f— our convoy with artillery.”